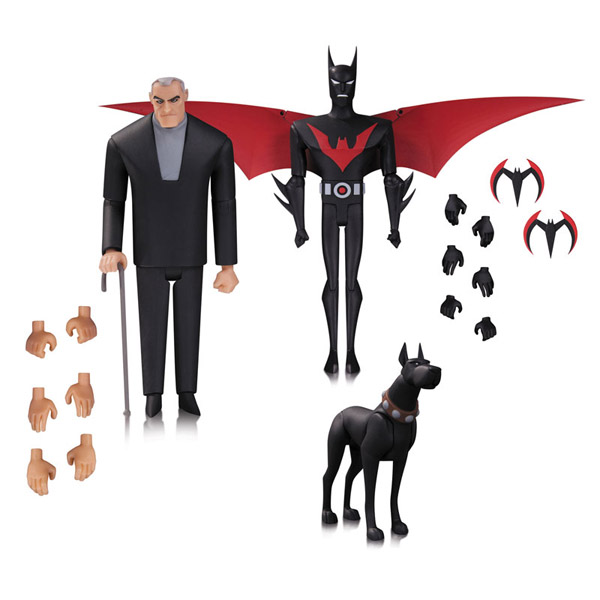 Get two generations of Dark Knight (along with a Dark Dog) with the Batman Beyond Action Figure 3-Pack.

In a dark world envisioned by Frank Miller, Bruce Wayne came out of retirement, but what if he needed another to carry the mantle of the Bat? That’s the world of Batman Beyond, with Terry McGinnis becoming the new protector of Gotham City as old, gray, and grumpy Bruce Wayne mentors him from the Batcave.

The Batman and Bruce Wayne figures are each approximately 6-inches tall, with Bruce’s guard dog, Ace, standing about 3-inches tall. In addition to two batarangs, each figure comes with interchangeable hands.

The Batman Beyond Action Figure 3-Pack will be available February 2017 but it can be pre-ordered now for $54.99 at Entertainment Earth.

Bruce Wayne’s Batman gets a lot of geek-wear love, and there’s nothing wrong with that since he’s the original deal, but others have worn the mantle of the Bat, with another fan favorite stepping out of the shadows on the Batman Beyond T-Shirt. Teenager Terry […]

Bruce Wayne has been cleaning up the mean streets of Gotham City for 75 years, and the Batman 75th Anniversary Set 1 Action Figure 4-Pack offers four action figures that display some of the various looks the vigilante has worn during his time as a […]

Kids, as well as adults love to roleplay and pretend that they are Batman. You just need the right gear. This Batman Dark Knight Rises Batarangs 2-Pack will give you two of Batman’s favorite weapons. These are just like the gold batarangs from the Christopher […]

A retired Dark Knight becomes a teacher for the next generation of crimefighters with the Batman Beyond Bruce Wayne Bust. Batman finally found a foe he couldn’t beat when he went toe-to-toe with Father Time, but a few years, a lot of gray hair, and […]