Is that a Bat-Signal in your pants or are you just happy to see me? It could be both if you’re wearing the Bat Time Glow-in-the-Dark Boxers.

Fans of the classic 60s Batman TV series will love these attention-getting, button fly, 100% cotton boxers. In addition to the glow-in-the-dark Bat-Signal, they also feature that catchy “NA NA NA” from the television show around the waistband, a silhouette view of Gotham City, and those iconic words known by everyone who ever watched Adam West and Burt Ward as the Caped Crusaders – “Same Bat-time, same Bat-channel.”

The Bat-Signal is, sadly, only on the front but the cityscape and the “NA NA NA” go all the way around. 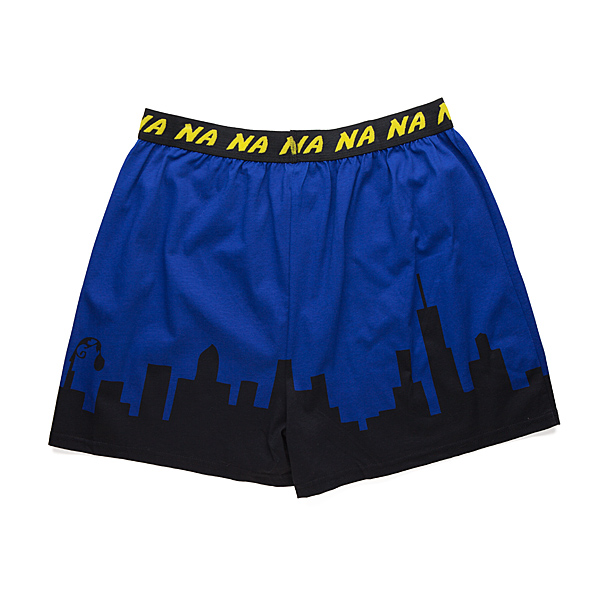 The Bat Time Glow-in-the-Dark Boxers are available for $14.99 at ThinkGeek.com.

Introduce your pants to the Man of Steel, the Dark Knight, and maybe the man of your dreams with the Superman V Batman Red Stripe Boxers. Superman! Batman!! Freddy Krueger??? Yes, Superman v Batman v Freddy… on your boxers, anyway. Hollywood hasn’t yet figured out […]

The villains of Gotham City have joined forces to defeat Batman and Robin on the Batman: Return of the Caped Crusaders Blu-ray. If you love the classic 1966 Batman television series but wish there was a way the Caped Crusaders could have a new adventure, […]

If you think of yourself as more a boy wonder than a caped crusader, these Robin Costume Caped Boxers are perfect for you. We can’t all be the headlining act after all. Anyway, Batman knows that he would be nothing without Robin. It’s called teamwork. […]

So you want to dress like Batman, but you don’t want everyone staring at your costume. The answer is simple. Just wear these Batman Grey Costume Caped Boxers under your clothes. You’ll feel like the caped crusader, but no one will know. They are made […]