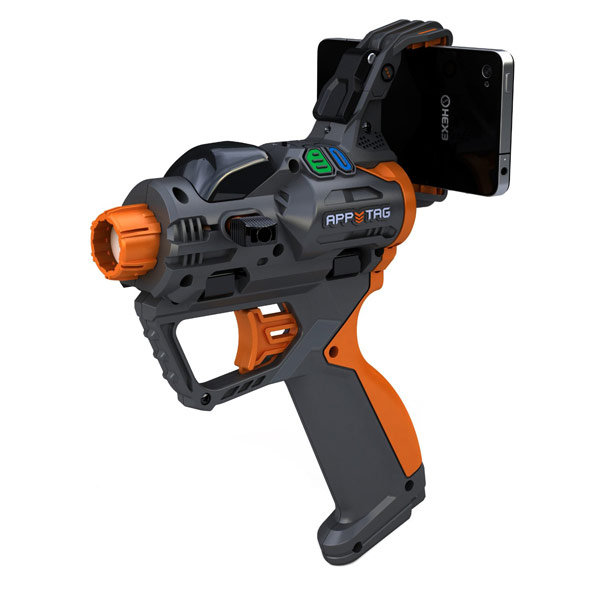 Laser tag is an awesome game but it can get even better when combined with video games and augmented reality. Grab the AppTag Laser Blaster to add a whole new dimension to playing with your pals.

Just connect your smartphone (as long as it has a camera function) to the Blaster, and let the Apps transport you into another world that looks just like yours, except there’s all kinds of stuff you can do in it.

Add more augmented reality weapons to your arsenal, grab some ammo packs, health kits, and body armor, similar to the way you would when playing Halo, but you’re not chained to a screen with this game.

Play single, multi or team games, and let AppTag keep score through its connection with iPods, iPhones or Android devices via high-frequency sound while you see how high you can get that number to climb. AppTag can also be used with other guns that have an accessory rail, such as Nerf and BuzzBee.

The AppTag Laser Blaster is available for $59.99 at Amazon.com.

Learning about space and the planets is fun, but it just got even more fun with the Popar Augmented 3D Reality Books. They will let you experience books in Augmented Reality. All you have to do is hold it up to your webcam and it […]

It’s time to add a little reality to your first-person shooter. Augmented reality, that is. The AppToyz AppBlaster v2.0 lets you open fire on aliens that are invading your home, office, or wherever you happen to be at the time. The augmented reality overlay, combined […]

Stop playing that first person shooter from the comfort of your couch and actually become the first person for real with the Electronic FPS Laser Battle Jacket. You won’t have to worry with joysticks or control buttons with this live-action game but you’ll still have […]