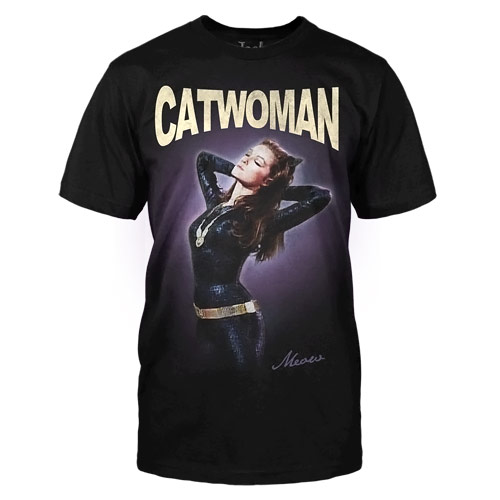 The 1966 Batman TV Series Catwoman T-Shirt features the absolute best thing about the cheesy adventures of the Caped Crusader and the Boy Wonder because Julie Newmar slinking around in a skintight bodysuit while purring was about as risque as television got back in those days.

Meow, indeed. Could you put handcuffs on Catwoman with her striking a pose like that? On second thought, it might be best if you don’t answer that question.

The 1966 Batman TV Series Catwoman T-Shirt can be the purrrrr-fect addition to your wardrobe for $25 at Jack of All Trades Clothing.

He dresses like a bat, she dresses like a cat. It’s seems like a relationship that’s doomed from the very beginning, but the Batman 1966 Cat-Lover TV Series T-Shirt proves that there’s hope for these two confused individuals of Gotham City. Adam West’s Batman has […]

The sexiest cat burglar to ever flirt with the Caped Crusader in the 1960s can be yours with the Batman 1966 TV Series Catwoman Pop! Vinyl Figure. Based on Julie Newmar’s portrayal of the curvy criminal, this 3 3/4-inch-tall vinyl figure from Funko depicts Catwoman […]