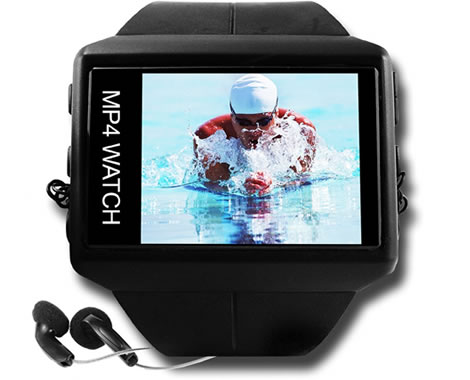 MP4 Watch II was released not that long ago, featuring a 1.8 inch large display. Now yet another watch with the same screen size has been released.

This one is available in three different sizes: 1GB, 2GB and 4GB. It retails from $37 for the small version, up to $60 for the one with the largest memory.

MP4 Player with a 1.8 Inch super high resolution OLED screen mixed with a fully functioning stylish Digital Watch, letting you carry your favorite movies and music on your wrist. This great wholesale gadget also has 7 EQ modes to maximize your musics sound, a voice recorder for taking notes, and will even display your digital photographs in JPEG or GIF formats.

You see new MP4 watches almost every week nowadays. Some better looking than others. Like this 1.5 inch OLED screen “high fashion” model.

A brand new version of this popular multimedia watch has just been launched. This time they’ve added a speaker and increased the TFT screen size to 1.8 inches (160×128 px). The earlier version had a 128×128 px screen.

Yes, it’s another one of those feature-packed multimedia wristwatches. This new model has a somewhat smaller screen than the ones we have seen lately, making it easier to actually be able to wear it.

Time for yet another one of those feature packed multimedia watches. This one comes with 8GB of built-in flash memory, the largest we’ve seen so far.

Luxury 2GB MP4 OLED Digital Leather Band Wristwatch ($109) is the long product name for this multimedia watch. The feature list is quite long too. The 128 x 128 pixel screen displays the time like an analog clock and can show photos, video and lyrics. […]

A gold edition “multimedia watch” is now available for those who wants to add a little bling bling to their feature packed timepiece.

This multimedia watch is not only a music player, voice recorder, image viewer, digital camera and an e-book reader – it also comes with a feature that most of its competitors are missing; the capability to record video.

This slim MP4 player, the thinnest one in the world with its 4.5mm, features a built-in radio and allows you to store files in MP4, MP3, WMA, ASF and WAV formats onto the 4GB large flash memory.

This multimedia watch can play video and music files, and it comes with a Bluetooth headset with an operation range of up to 10 meters (33 feet).