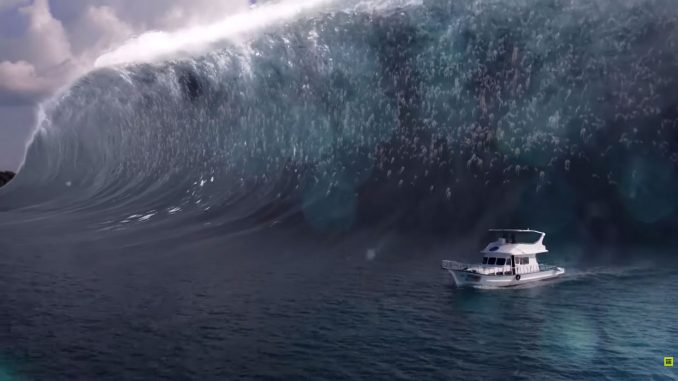 If you’re a fan of campy sci-fi schlock like Sharknado, check out the new Zombie Tidal Wave Official Trailer. Directed by Anthony C. Ferrante, who also directed all the Sharknado films, Zombie Tidal Wave stars Ian Ziering and promises to be as over-the-top ridiculous as the rest of the made for SYFY B-movies.

From Ian Ziering and the director of the Sharknado movies comes Zombie Tidal Wave. Do we need to sell it beyond that? Premiering August 17 on SYFY.

Keep others away from your coffee with this handy Caution Sharknado Area Mug. No one wants to brave a Sharknado. One side reads “Caution: Sharknado Area” with a warning sign. The other side says Sharknado / Enough Said with the Sharknado logo. Who would be […]

Hot on the heels of Sharknado 3 comes Archie vs. Sharknado, with the sharknado-filled tornadoes crashing down on Riverdale. Archie, Betty, Veronica, Jughead, and the rest of the gang just can’t catch a break. First, a leisurely vacation turned them into intergalactic prey in Archie […]

So Now You’re a Zombie Book

Be honest, how many of you are getting ready for total chaos come December 2012? Well if you are, you probably have also thought about the increasing likely odds that you or someone you know will become a zombie. If this sounds like you, then […]

How will you survive the impending Sharknado? You know it’s going to happen. Well, this Official Sharknado Survival Guide will prepare you for the inevitable encounter. Be prepared. Don’t be shark food. This book has vital information about dozens of unnatural disasters and ungodly monsters […]