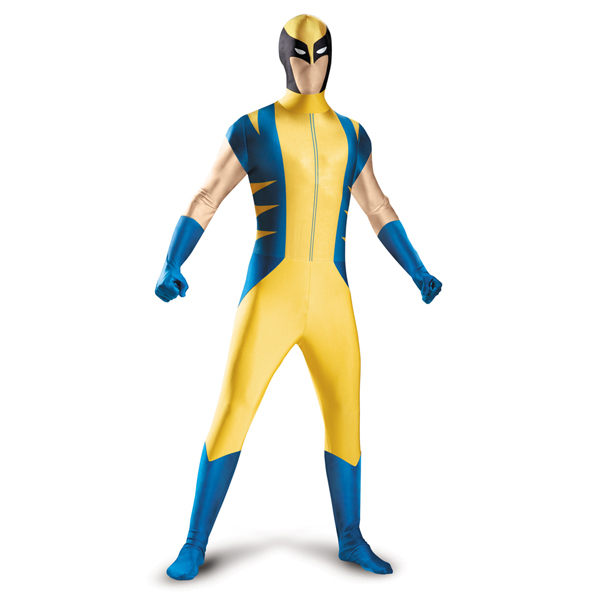 Do you want to look as tough and intimidating as the adamantium-clawed Logan? The X-Men Wolverine Deluxe Bodysuit Costume probably won’t accomplish that but it will make you look incredibly creepy.

Bodysuits are like a happy accident. It’s like somebody got the idea to put recognizable designs onto this skintight material in an effort to create the next new style trend, but the results didn’t turn out as planned. Instead of dumping the whole mess in the trashcan, it was approved for sale and the creepy bodysuit trend was launched. After all, why wear something cool when you can wear something odd? Everyone does cool; it’s time to be different.

This particular bodysuit features the iconic image of Wolverine’s blue and yellow outfit, which is recognizable to comic book fans but movie fans have had to, sadly, do without, and honestly, this bodysuit doesn’t look too bad… if you pretend Logan fell prey to some evil weapon that made his body shiny and did something weird to his face.

The X-Men Wolverine Deluxe Bodysuit Costume is available for $49.99 at StylinOnline.com.

Like a smuggler frozen in carbonite hanging on the wall, you’ll be getting all the attention when you’re wearing the Star Wars Graphic Bodysuit. Forget the Jedi and the Sith because the Force will be with you with this graphic bodysuit because it features eye-catching […]

This Wonder Woman Gold Foil Bodysuit looks amazing and may even give you special powers. Just don’t try to stop bullets with your wrist. It is a super-soft bodysuit with cap sleeves and an oversized logo on the front. It will look great with jeans […]

This Alphabet Science 3-pack Bodysuit Set lets you teach your kids about the alphabet and science at the same time. These white organic cotton bodysuits have contrasting piping and you get a set of 3: A is for Atom, B is for Beaker, and C […]