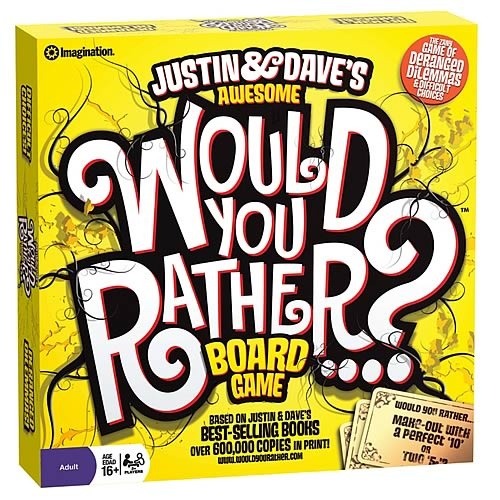 Icebreakers exist for many reasons. One, to (obviously) break the ice, either at get-togethers or at parties that are starting to get a little boring. And two, to get to know each other better. You can do that with other games like the Conversation Games or the Would You Rather? Game.

The Would You Rather? Game is just a game of picking which of two options you’d rather go with. You could play it as the game that it was intended to be with the game board or movers, or you could just hand the cards out during parties and have players give their answers and maybe a short explanation why they chose what they did to make things more fun.

Would You Rather? Game

Are you ready to face some difficult choices and deranged dilemmas? You’d better be, because you have to answer if you want to win the Would You Rather Game! This challenging trivia-type contest for players ages 16 and up includes a game board, question cards, and movers.

The Would You Rather? Game is available for pre-order from Entertainment Earth for $19.99.