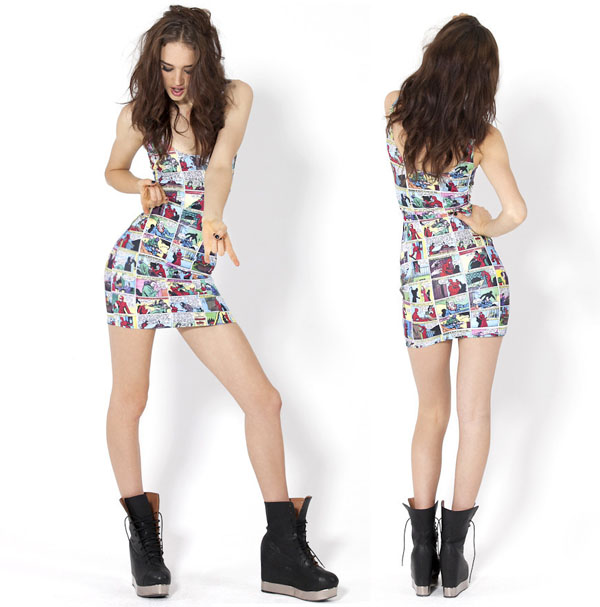 Comic book super heroine The Woman In Red (no, not Kelly LeBrock in that 80’s flick) took charge of her life when the system was working against her. Women have come a long way since the 1940’s, but we still share some common struggles with this heroic femme fatale. Till this day, we are still fighting crimes of fashion and one way to combat fashion faux-pas is to wear this fantastic Woman In Red Ep. 1 Dress.

Woman in Red Ep. 1 Dress
The Woman in Red was one of the first ever comic heroines. She first appeared in 1940, the alter ego of police investigator Peggy Allen. Frustrated by all the red tape of her job, Peggy decided to fight crime more directly and created the costume identity of the Woman In Red, dressed in her red floor length coat, hood and mask. Part 1 in our Woman in Red series. 🙂

Just don’t get offended if eyes start to wander away from your face towards your curves. Geeks won’t be able to resist reading the dialogue and taking in the action scenes. Really… it’s not you; it’s the dress!

Designer James Lillis created this stretchy polyester/Lycra dress in Australia. Wear this signature piece when you’re ready to hit the town in a butt-kickin’ mood. You definitely won’t want to machine wash/dry this dress because of the likelihood of shrinkage.

You can find the Woman in Red Ep.1 Dress at Black Milk for $99 AUD.

Other eye-catching ladies’ items that GeekAlerts has featured from this Aussie retailer include the Beer Dress, Nintendo Gameboy Dress, and Police Box Dress.

You don’t have to be British to recognize a police box, as any Doctor Who fan knows the TARDIS is in the shape of a London police box from the 1960s. I guess BlackMilk Clothing didn’t have the licensing to call this a Dr. Who […]

R2-D2 has never looked so good! The officially licensed Star Wars R2-D2 Dress is called the Artoo Dress and is part of a new Star Wars line of clothing coming from the designers at Black Milk…Black Milk joined forces with Lucasfilm so they have over […]

One of the hottest dresses ever featured on GeekAlerts was the Strapless Nintendo Dress. The first version was made of jersey knit cotton and felt, and then the designer came out with a slinkier, darker gray version made of even stretchier material. Now there’s a […]

Are you stressing about what to wear to your holiday party? This Red Plaid Long Halter Dress is fancy enough to wear to a semi-formal event, edgy enough to reflect your rockin’ personality, and not so frilly that it looks like you’re trying to be a […]

“Wow, that girl looks as delicious as a tall glass of iced-cold beer,” says a fellow at happy hour. “Yeah, especially when she’s wearing that hot Beer Dress,” replies his friend. It’s true that the quickest way to a man’s heart is through his stomach, and […]

You’ve heard about some women who go on extreme diets to get that figure that photo shopped models have. But like I’ve said before, they don’t have to go that route to feel sexy or look sexy. It’s all about confidence, attitude and of course, […]

This year, we’re seeing a lot of Halloween costumes that are knockouts even though they are surprisingly simple. Some that come to mind are the Cutie Candy Corn Dress, Bones Tank Dress, GlowGirl Costume, Minecraft Steve or Creeper Heads, Star Wars Inflatable Tauntaun Costume and Inflatable Jabba the […]