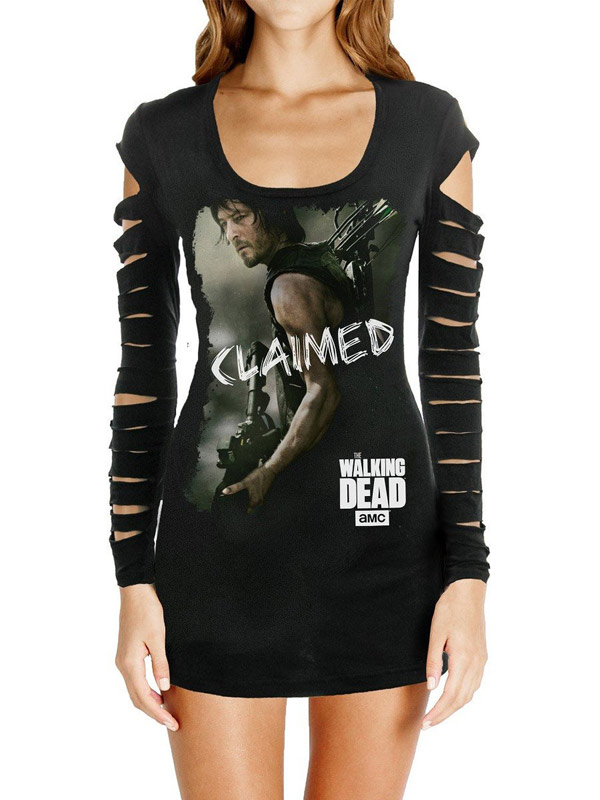 The Walking Dead “Daryl Claimed” Laser-Cut Juniors T-Shirt will probably roar off the shelves like a zombie-killer on a motorcycle because it’s safe to say most women wouldn’t mind being claimed by Daryl Dixon.

This officially-licensed tee, looking stylish in an apocalyptic kind of way with laser-cut sleeves, features Daryl holding a rifle with his crossbow across his back, with ‘CLAIMED’ boldly stamped across the image. Is the shirt telling people you’ve been claimed by Daryl or is it a warning to others that you’ve claimed Daryl for yourself?

The Walking Dead “Daryl Claimed” Laser-Cut Juniors T-Shirt is available for $29.99 at ShopTheWalkingDead.com and from $19.50 at Amazon.com.

The Walking Dead “Because Daryl Said So” T-Shirt will be a favorite for Daryl’s fans because it boils even the most complex situations down to the simplest answers. What to do about a particular situation? Ask Daryl. Why did you do that? Because Daryl said […]

You probably know you’ll never be as tough as Daryl Dixon but you can get a little closer to his level of awesomeness with the Walking Dead Roleplay Weapon: Daryl’s Crossbow. Officially-licensed, this plastic prop is perfect for TWD fans who want to cosplay Daryl […]

Admit it, ladies. You’re hoping for a zombie apocalypse so you can wait for a certain zombie-killing redneck to show up. The Walking Dead Waiting For Daryl T-Shirt lets everybody know where you stand with the whole relationship thing. It could even result in a […]