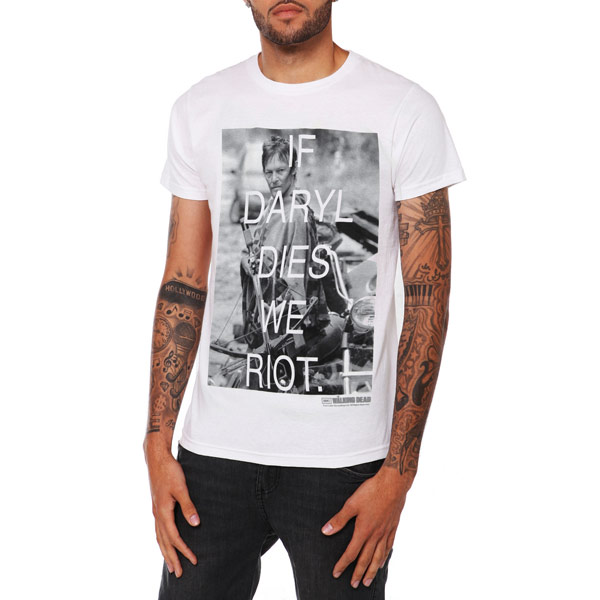 Nobody is safe when the dead rise and start feeding on the flesh of the living but the Walking Dead Daryl Riot T-Shirt provides a pretty good clue as to who the fans want to keep around.

Rick has stepped up and is no longer getting buried in Shane’s shadow, and Glen has gone from being an almost invisible wallflower to a guy capable of taking out a zombie while tied to a chair, but Daryl Dixon is the zombie survivor that stole everyone’s heart. Ever heard the expression, ‘Guys want to be him and girls want to be with him”? The person that first said that was talking about Daryl.

With the phrase “If Daryl Dies We Riot” printed in bold caps over an image of Daryl striking a tough pose (does he strike any other kind?), the Walking Dead Daryl Riot T-Shirt will let everyone know where you stand on the subject. The shirt is available for $20.50 to $24.50 at Hot Topic…also in a woman’s version as see below. 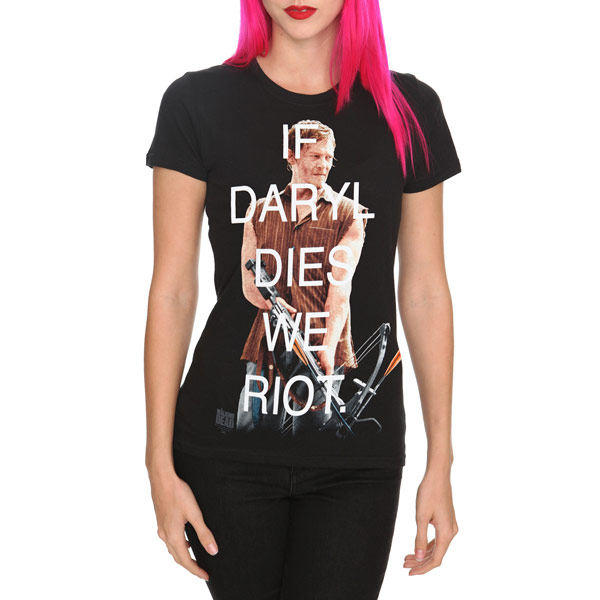 The Walking Dead “Because Daryl Said So” T-Shirt will be a favorite for Daryl’s fans because it boils even the most complex situations down to the simplest answers. What to do about a particular situation? Ask Daryl. Why did you do that? Because Daryl said […]

The Walking Dead “Daryl Claimed” Laser-Cut Juniors T-Shirt will probably roar off the shelves like a zombie-killer on a motorcycle because it’s safe to say most women wouldn’t mind being claimed by Daryl Dixon. This officially-licensed tee, looking stylish in an apocalyptic kind of way with […]

Admit it, ladies. You’re hoping for a zombie apocalypse so you can wait for a certain zombie-killing redneck to show up. The Walking Dead Waiting For Daryl T-Shirt lets everybody know where you stand with the whole relationship thing. It could even result in a […]

The ladies will want to snatch up this Walking Dead Daryl Wings Lace-Up Women’s T-Shirt quick because Daryl is a hot commodity under normal situations. As an angel, his appeal just tripled. To many woman (and a few guys), Daryl is simply an angel. To walkers, […]

Fans of zombies and the macho guys who kill them will want to slip into the colorful Walking Dead Daryl Dixon Hunter T-Shirt. The eye-catching image, which is available for both men and women, is printed on an American Apparel t-shirt that comes in three […]

Create your own zombie apocalypse with The Walking Dead ‘Daryl With Chopper’ Building Set. With 154 pieces, this building set is almost as challenging as taking out a walker with a pencil but you can do it because Daryl Dixon is with you. Unfortunately, so […]