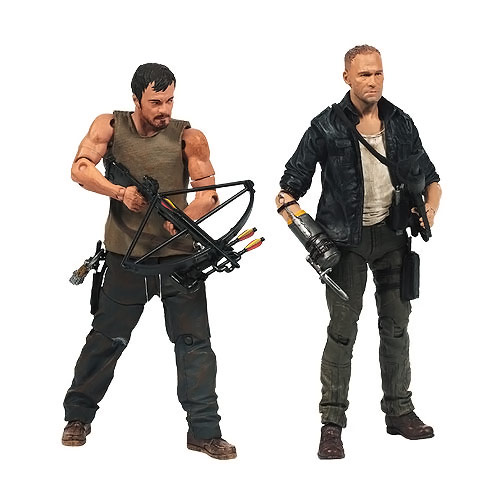 The Dixon brothers are back together with the Walking Dead TV Merle and Daryl Dixon Action Figure 2-Pack, featuring fan-favorite Daryl and his uniquely-weaponized brother, Merle.

You might already have this version of Daryl, but this version of Merle is only available in this 2-pack…Which isn’t a bad thing because there are many that would agree there’s no such thing as too much Daryl.

Both Daryl and Merle have 20 points of articulation, and they both bring plenty of goodies to the Walker-killing party:

Daryl Dixon has a crossbow, hunting knife, fire axe, pick axe, and prison keys. Merle Dixon is “armed” and ready with a prosthetic arm and bayonet, an assault rifle, a pistol, and a knife.

Let the rednecks rule with the Walking Dead TV Merle and Daryl Dixon Action Figure 2-Pack. It won’t be available until September 2013, but can be pre-ordered now for $27.99 at Entertainment Earth.

Daryl Dixon might be the guy every man wants to be and every woman wants to be with, but his brother left a lot to be desired. Still, the Walking Dead Merle Dixon Walker 1/4 Scale Statue might make you think you have something in […]