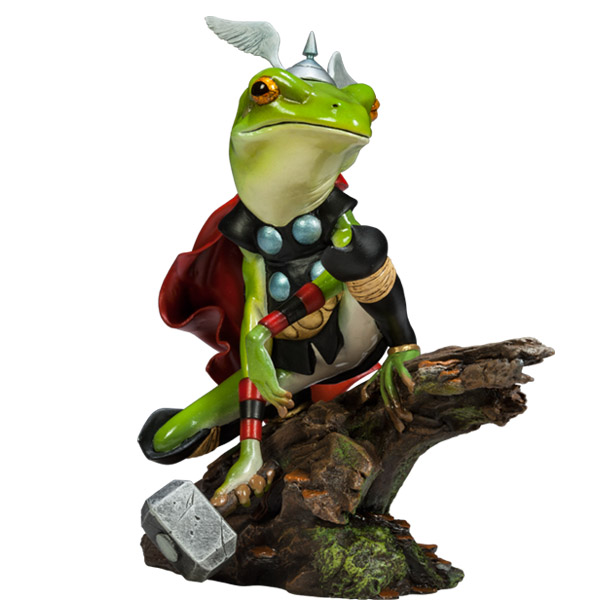 Do you know what the Thor comics and movies need? More characters that represent the amphibian population. The Thor Frog Diorama is targeted to those people – and frogs – who think Thor needs a little more green in his life.

Actually, I have to give Marvel Comics credit where credit is due because Thor Frog (known as Throg) actually has had a few adventures in the Thor comic books, even spinning off into adventures with the Pet Avengers, but Hollywood is slow to embrace this particular character.

Throg is the defender of Central Park, using a sliver of Thor’s hammer to wield a portion of the Thunder God’s strength. This six-inch-tall statue captures Throg in all his vibrant splendor as he looks upon the park from his perch, forever ready to defend his fellow  frogs from the evil rats.

The Thor Frog Diorama will be available October 2014 but it can be pre-ordered now for $99.99 at Sideshow Collectibles.

The Ur.Frog wrist rest is made of silicone and features built-in LEDs that will make the frog glow in the dark when it’s connected to a USB port.

You have your garden glowing of LightCubes and MagicGlobes at night. In daytime it’s like a light orchestra of 24 Carrot Gold bling bling. You are still not satisfied. There is something missing. Frog Solar Light ($30) to your rescue. This amphibian fellow glows when […]

When it’s cold outside, there’s nothing more comfortable than lounging around inside in super-soft comfortable slippers. For the guys there are many cool choices including Batman, Superman, and Cthulhu slippers. However, for people that like cute animals, it doesn’t get much better than these Fun for […]

Are you still searching for that perfect Father’s Day gift? Or maybe you’re just looking to add to your fine collection of specialty alcohols? Either way, this Valhalla Collection Thor Whisky needs to be on your list. From Highland Park, this single malt scotch whiskey […]

When you’re talking large and in charge, you’re talking about the shiny, walking weapon from the movie, “Thor,” that’s depicted with the Thor Destroyer Maquette. This bad boy has gone toe to toe with the Thunder God himself and managed to show ol’ Goldilocks he […]