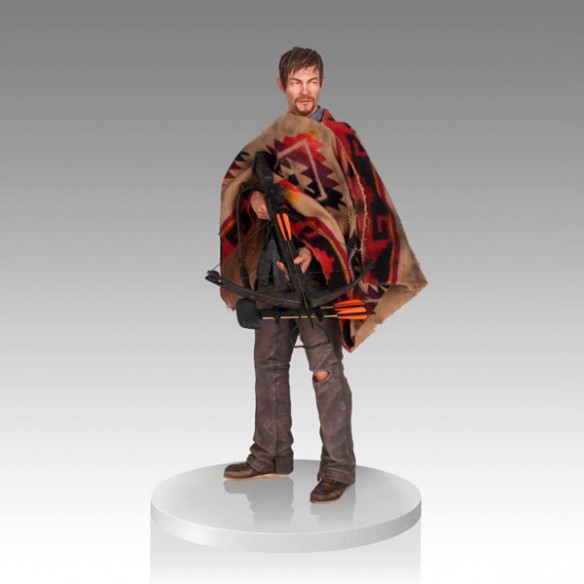 During those slow times between Walking Dead episodes that are as agonizing as having a Walker munch on your arm, you can make things a little easier to bear with the Walking Dead Daryl Dixon 1:4 Scale Statue, because anyone that can make a poncho look cool deserves a place in your home.

Daryl is a larger-than-life character that became an instant fan favorite on the hit AMC show, so it’s only right that this statue measures a whopping 18-inches in height. The figure has been digitally sculpted and cold cast using only the highest quality polystone, and features the lovable bad-ass in his signature look of sleeveless t-shirt, torn jeans, and a removable cloth poncho. Of course, Daryl never knows when any Walkers might be coming around for a quick bite so he’s also armed with his trusty crossbow.

The Walking Dead Daryl Dixon 1:4 Scale Statue will be available January 2015 but it can be pre-ordered now for $449.99 at Entertainment Earth.

You’ll have your hands full fighting walkers after the zombie apocalypse happens, which is why you’ll need the Walking Dead Daryl Dixon Poncho Messenger Bag to carry your stuff in. Measuring approximately 17-inches-long by 12 1/2-inches-tall, this bag is designed to match Daryl Dixon’s macho […]

Look cool. Look tough. Kill zombies. Easy rules to live by when you’re wearing the Walking Dead Daryl Dixon Winged Vest… and isn’t it about time this thing became available for TWD fans? It’s been a long time coming but maybe there were licensing issues. […]