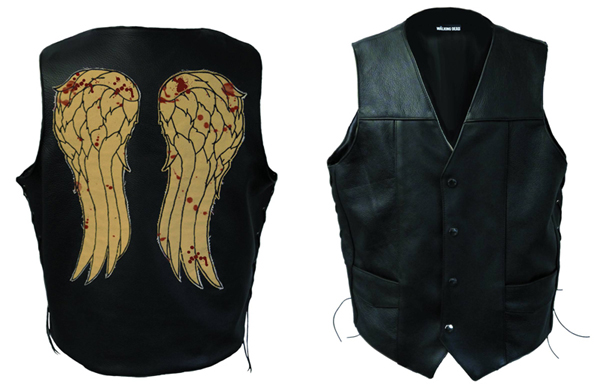 It’s been a long time coming but maybe there were licensing issues. Whatever the reason for the delay, the time has finally come for this officially-licensed replica of the vest worn by Daryl Dixon (Norman Reedus) on The Walking Dead. It even has blood splatter on the back so you can go around and act like you’ve been popping a few walkers in the head… as they stand behind you? Hmmm. No matter, because it’s still pretty cool. Now all you need is the bike, the crossbow, and the too-cool-to-worry-about-dead-people-walking-around attitude, and you’ll be just like Daryl.

The Walking Dead Daryl Dixon Winged Vest will be available October 2014 but it can be pre-ordered now for $251.99 at Urban Collector.

When the dead start walking, you need to be prepared with your gun, your crossbow, and your Daryl. What? You don’t have one of those? Lucky for you, there’s The Walking Dead Daryl Dixon Sixth-Scale Figure. Based on Norman Reedus’ portrayal of the fan-favorite character […]

Daryl Dixon is a popular Pop! Vinyl character and there are plenty of versions to choose from, but the Walking Dead Daryl Dixon with Chopper Pop! Vinyl Vehicle adds a new twist by giving the Funko treatment to Daryl’s motorcycle. A leather-clad guy on a […]