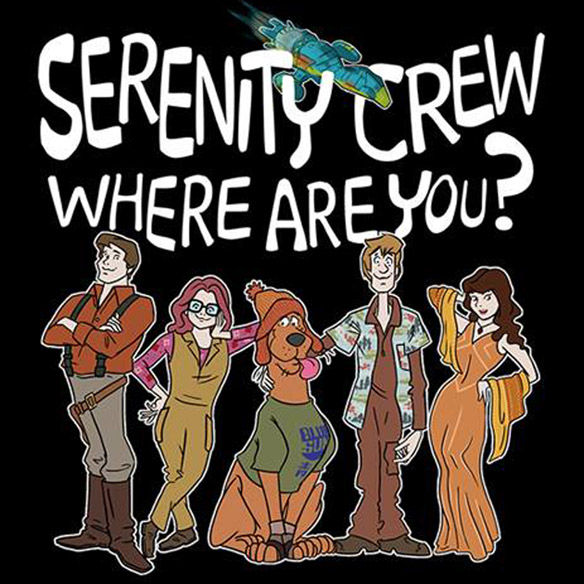 Scooby Doo and the gang meet Captain Mal and his crew on the Shiny Gang T-Shirt, offering us an interesting mash-up that I’d desperately like to see brought to life as an animated show.

I’ve accepted the fact that we will probably never have Firefly brought back but this – THIS – really needs to happen. The artwork, provided by the talented James Hance, offers too much goodness in one image. From Shaggy as Wash to the Serenity sporting the Mystery Machine’s paint job, this idea is begging to be turned into an animated television series. Doesn’t Daphne totally work as Inara? Can’t you see Scooby’s Jayne toting a big gun called Scooby Snack?

However, since that also probably won’t happen, we’ll have to be happy with Hance’s image on an American Apparel t-shirt. 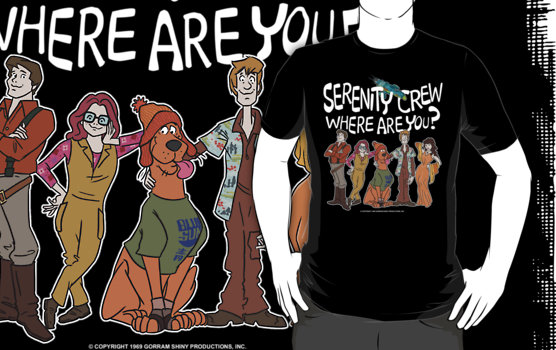 The Shiny Gang T-Shirt is available for $23.61 at RedBubble.com.

Kaylee from Firefly and Chewbacca from Star Wars have decided to go into business, and they’d appreciate you wearing the Shiny Repair Service T-Shirt to help spread the word. When it comes to keeping things shiny, Kaylee is the girl Captain Mal turns to, while […]

Add a little serenity to your life when you wear the Firefly Shiny Spaceship T-Shirt, and impress everyone by having the shiniest ship in the ‘verse on your chest. The Firefly-class Serenity lives up to both its names with a tee that features the iconic […]