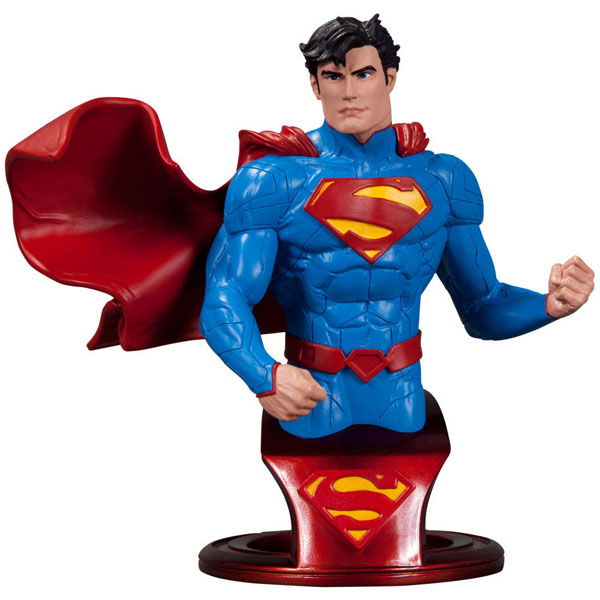 Need a DC Comics collectibles fix? This looks like a job for Superman, but not any old Man of Steel will do. The New 52 – Superman Bust brings you the last son of Krypton as pictured after DC Comics did their New 52 reboot, bringing the iconic character into the 21st Century with a  brand-new look that still pays respect to the original styling.

The new Superman has traded his red-underwear-on-the-outside-of-his-pants look for a more armored design, which is a good indication that Supes no longer packs the same punch he used to. He’s also traded his yellow belt for a more stylish red one.

The bust, sculpted by Jean St. Jean, is practically a must-have item for anyone that collects DC Comics figures to capture the New 52 redesign of the world’s first super-hero.

The New 52 – Superman Bust is about $55 at Amazon.com and is also available at the BigBadToyStore.com and the WBShop.com.

The animated Superman comes to life in this Superman: The Animated Series Superman Bust. The Last Son of Krypton stands about 6-inches tall, in an action pose atop a pedestal inspired by the art-deco architecture of Metropolis. This bust captures Superman in all of his […]

This Batman Universe Bust Collection Batman Bust with Magazine #1 is a great collector’s combo. This cool Batman bust measures about 5-inches tall. It comes with a 16-page magazine packed with information about the bust, Batman, and over 75 years of DC comic books, TV, […]

He’s the hero that holds his own without super-powers; the man whose glare fills bad guys with dread… and you can take him home. The Batman Life-Size Bust is the first in a line of DC Comics Life-Size Busts, and he’s the perfect guy to […]