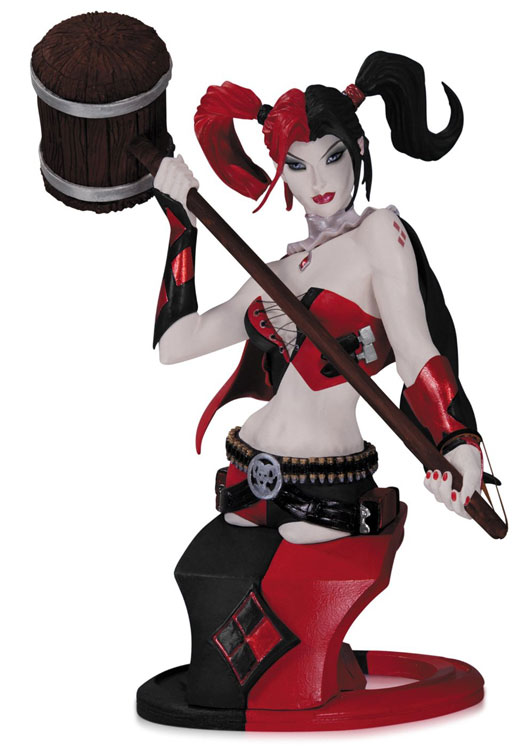 Everyone’s favorite crazy harlequin is ready to whack a few heads on this 6 1/4-inch-tall bust that features Harley Quinn dressed in classic red and black, although she’s traded her jester outfit for something a little less confining… because Harley’s not big on being confined.

True fans of Harley Quinn will probably want to pair this with the Harley Quinn First Edition Bust that features Harley in New 52 red and blue.

The DC Comics Super Villains Harley Quinn Second Edition Bust is available for $42.99 at Entertainment Earth and $32.08 at Amazon.com.

Add this DC Comics Super Villains Harley Quinn Bust to your DC Comics collection and give your Joker a crazy and sexy companion. Even the nut jobs need love right? Harley Quinn is bubbly and psychotic and has busted out of Arkham Asylum. This intricately […]

The Clown Prince of Crime is ready to have a little fun on the DC Comics Super Villains The Joker Bust. Designed by legendary artist Jim Lee, Batman’s arch-nemesis is suited-up and ready to party. With night-vision goggles, a vest filled with all kinds of […]

The Joker is one of the best comic book villains because you never know what he is going to do next. He is crazy and unpredictable. Keep this DC Comics Super Villains Joker Bust on your shelf and be reminded of all of his crazy […]