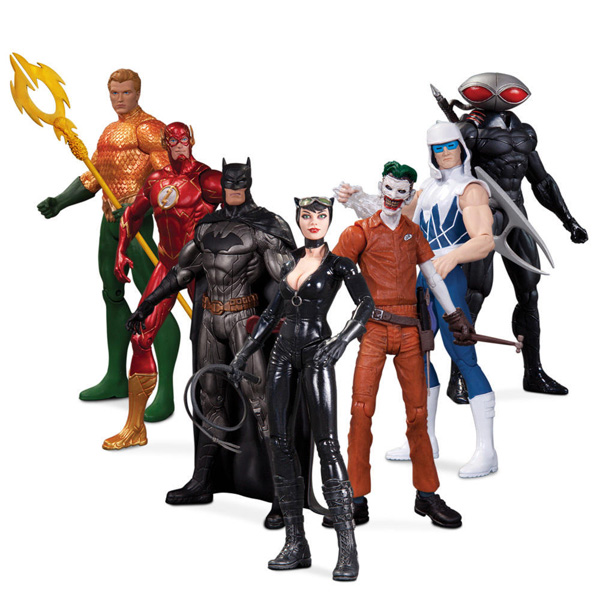 Heroes need villains and villains need heroes. Otherwise, you just have a bunch of weirdos in colorful costumes standing around. The DC Comics The New 52 Super Heroes vs. Super Villains Action Figure 7-Pack provides good guys and bad guys at the same time so it’s easy to start the fight for or against truth and justice.

The DC Comics The New 52 Super Heroes vs. Super Villains Action Figure 7-Pack is available for $99.99 at Entertainment Earth and $71.99 at Target.com.

Just like it says in the title, the Ultimate Marvel: Super Heroes Villains Locations Technology Vehicles Hardcover Book is your guide to every significant Marvel Comics character, location, vehicle, and weapon. It’s all here between the pages. It has everything from the first major Marvel […]

This DC Comics Heroes and Villains Playing Cards set will spice up all of your card games. All of your favorite heroes and villains are here. Deal them in. These cards stack the deck in your favor. This deck features heroes like Superman, Batman, Flash, […]

You need to collect these figures from the DC Heroes & Villains Blind Box Collection. They are tiny and super adorable. There are 6 different figurines to collect in Series 1 with one cool chase figure in the mix. By cool I mean freezing, as […]

One of Aquaman’s classic villains gets the spotlight as the Aquaman Black Manta Forever Villains ArtFX+ Statue. The man has been battling the Lord of Atlantis since 1967 and he still hasn’t found a helmet that fits. That over-sized noggin serves a purpose though, letting […]

For all of you that think pop-up books are for kids, I got something that might just change your mind. The DC Super Heroes: The Ultimate Pop-up Book is the work of world renowned pop-up engineer Matthew Reinhart and contains over 25 unique pop-ups. Don’t […]

This Star Wars Heroes and Villains Lapel Pin Set is cute as a button. Make that a pin. Four of them. Use them to decorate your laptop bag, or your lapel, or anything. Have you ever seen a cuter set of Star Wars pins? I […]

Look at how sleek and shiny this Flash DC Comics Super Heroes Bust looks. Like a new car, only much faster. This bust is standing still, otherwise you would never see him. The Flash is captured midstride in this 5 1/2-inch tall Flash DC Comics […]