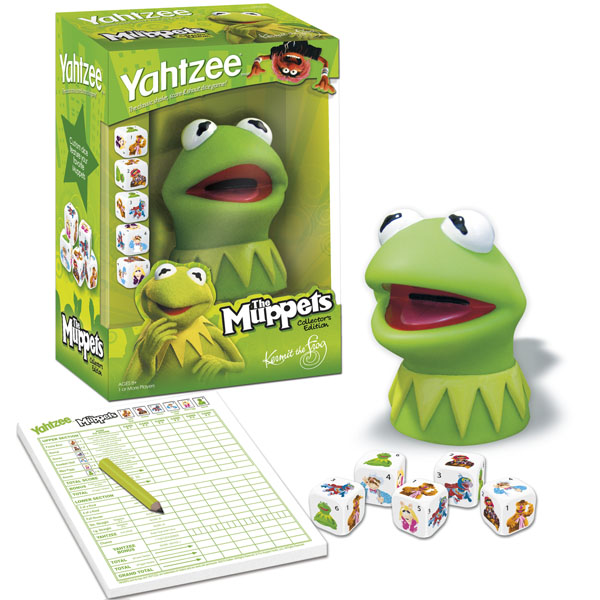 The Muppets make their premiere in America’s all-time #1 dice game in this special Collector’s Edition YAHTZEE. Custom dice featuring Kermit, Miss Piggy, Fozzie Bear, Animal, Gonzo and the Swedish Chef are ready for you to shake up and roll dice combinations like Full House, Large Straight and Five of a Kind. A custom Kermit dice cup makes this YAHTZEE game with a Muppets twist a treasured collector’s item for fans of all ages. Game comes complete with 5 collectible dice, custom score pad and pencil. For 1 or more players, ages 8 and up.

Just having Kermit’s smiley, green head to put on display is reason enough to buy this game. But Kermie does more than just pose as his dapper self. He acts as a dice cup that stores and rolls the five decorative dice, each graced with an image of the coolest Muppets alive. To this day, I swear they’re alive. You’ll also get a paper score pad and a lovely green pencil.

By the way, if you haven’t seen The Muppets Movie by Disney in theatres, the DVD is set for release on March 20.

In the meantime, shake things up with The Muppets Collector’s Edition Yahtzee Game. You can find the game on Amazon starting at $13.30 as well as at Toys R Us for $16.99.

You think you know how to insult, diss, troll, and throw shade? Pay your respects to the original haters with the Muppets ‘Haters Gonna Hate’ T-Shirt, because nobody can hate on these two masters of grumpy. When it comes to throwing Jedi-Master-level insults, nobody can […]

Yahtzee is a classic dice game that families have enjoyed for decades. If you want something a bit more modern and geeky in your Yahtzee set, get this awesome South Park Yahtzee game. Yes, it is the same old game that you know and love, […]

Muppet fans will be more than happy to spend hours perusing this Muppets Character Encyclopedia Hardcover Book. The entire Muppet gang is here. Everyone from Kermit the Frog to Animal and Fozzie Bear. Each page of this guide features a different Muppet profile that has […]

Either way, this Ghostbusters Slimer Yahtzee is the preferred way of playing Yahtzee for Ghostbusters fans. America’s #1 dice game is back and this time it has a Ghostbusters makeover. With this game you can shake the dice in a collectible Slimer dice cup, as […]