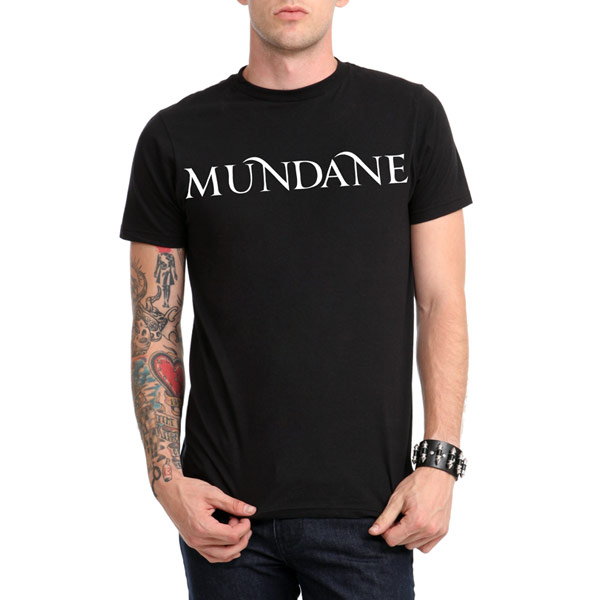 Sometimes truth in advertising really is the way to go, especially when it could save your life. The ego-saving grace of the Mortal Instruments: City Of Bones Mundane T-Shirt is that the big, bold word on your chest isn’t really an insult. Instead, it’s a sign that beasties like demons and vampires don’t have to bother with killing or eating you.

In the Mortal Instruments books, written by Cassandra Clare, mundane doesn’t necessarily mean that you lack interest or excitement; it just means you’re a regular human that has no powers that supernatural creatures can view as a threat… which means they don’t see a Mundane as an enemy.

No worries over demons trying to eat my face? I’ll gladly be mundane. Way less risky than being a Shadowhunter.

Let the hidden supernatural world know how harmless you are with the Mortal Instruments: City Of Bones Mundane T-Shirt for $15.38 at Hot Topic.

First, people came up with a way to share their favorite movie theater snacks and treats with their canine best friends with the Doggy Snack Packs. Now it’s time for some high-class eats and flavors with the Gourmet Edible Tasty Bones Dog Treats.

It’s a dish a lot of people love, but it’s something that probably many people dislike as well: chicken feet. I personally don’t get how some people could stuff foot after foot in their mouth, but after seeing these Crazy Bones Lollipops, I probably won’t […]

Bring a little bit of the house party home with the Iron Man Mark XLI ‘Bones’ Sixth-Scale Figure, featuring one of the sharpest suits of armor that Tony Stark has ever designed. I don’t know what it is about Bones, but I love this armor […]

The always-relevant wisdom of Dean Winchester is yours with the Supernatural Driver Picks the Music T-Shirt. There are a couple of things to expect in Supernatural. The Winchester boys will never run out of monsters and demons to fight, allies (especially supernatural ones) will eventually […]

Show your love for anatomy with this White Ribs Bones Tank Top, making it look like you’re wearing a top with x-ray powers. Stripes? Solids? Bone? A new choice is added to your wardrobe selection, although making a decision could never be easier when you […]

This Mr. Bones Skeleton Ice Tray will take any drink and make it into a chiller thriller. It’s perfect for any occasion, but especially for haunted themed parties or goth get-togethers. This mold is shaped like a scary coffin and will make an awesome ice […]