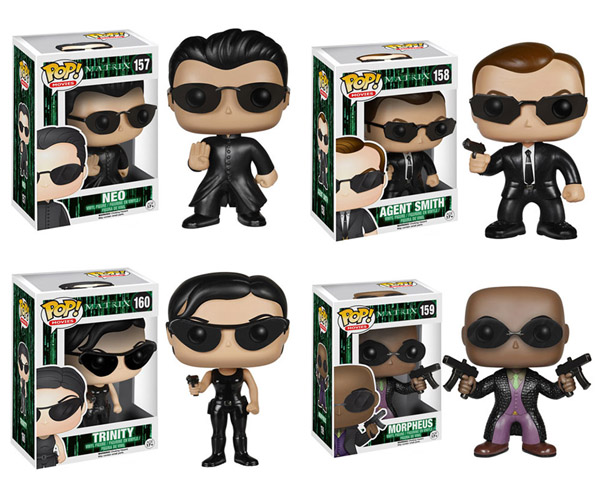 It doesn’t matter if you take the red pill or the blue pill because The Matrix Pop! Vinyl Figures let you join Neo, Trinity, Morpheus, and Agent Smith in their battle over cyberspace.

No one can be told what the Matrix is but these Funko figures can be described with no problem at all. Each 3 3/4-inche-tall figure depicts a major character from the Matrix films as they appear in the Matrix itself instead of the rough Dystopian world they really live in. Morpheus is looking exceptionally sharp, and that bullet-stopping pose is perfect for little Neo.

The Matrix Pop! Vinyl Figures will be available March 2015 but they can be pre-ordered now for $9.99 each at Entertainment Earth. Choose from Neo, Trinity, Morpheus, and Agent Smith.

The Matrix Pixel Figure 4-Pack offers cute versions of Neo, Trinity, Morpheus, and Agent Smith. All of them have recieved the 8-bit treatment! These fun figures are based on the groundbreaking Matrix trilogy, and they turn your favorite characters into blocky 3-inch tall vinyl figures. […]

Halloween is past for this year, but the Matrix Light Up LED T-Shirt is something you can wear everyday. The Matrix movie has a huge following, and the Matrix digital code (aka “Green Rain”) is instantly recognizable. This electro-luminescent t-shirt captures this effect perfectly, and […]

GeekAlerts has shown you Dynomighty Mighty Wallets in the past, but this Dot Matrix Pi Mighty Wallet is perfect for fans that like to celebrate pi all year round. Made from Tyvek, this wallet is tear resistant and features a stitchless design that allows the […]

The answer is you. These POP Twin Peaks Vinyl Figures are super-cute Funko POP! versions of the characters from Twin Peaks. Fans are going to love them. You can choose Agent Cooper, Audrey Horne, the Log Lady, or Laura Palmer. Recreate your favorite scenes and […]