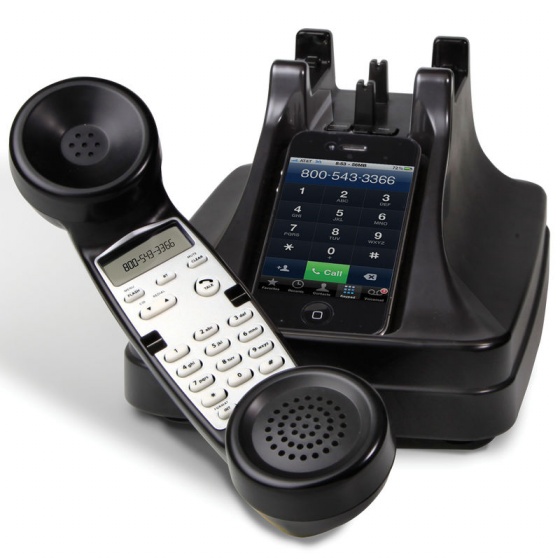 Apple’s smartphone, the iPhone, is one of the most advanced of its kind. As far as I know, few companies have come up with touchscreen devices that can rival that of Apple’s. But if you’re into retro, then you might want to look into the iPhone Cordless Handset.

It’s pretty similar to the Scandiphone Retro Telephone and to the Sagemcom Sixty Cordless Telephone, only that this one isn’t as bold with its basic black color. In fact, the iPhone Cordless Handset more or less resembles the phones that were in existence in the thirties and forties. Despite its old-fashioned design, this handset comes with some pretty neat features too. Aside from letting you make and take calls, it can also save around 50 phone number entries and list down the last 30 received calls from your phone.

This is the stand that transforms an iPhone into a more comfortable cordless handset phone. With the handset in one hand, your other hand is free to navigate an iPhone’s applications, such as calendars, e-mail, and the Internet. An iPhone rests on a telephone base reminiscent of models from the 1930s, synchronizing with the base via Bluetooth while the cordless handset communicates with an iPhone via DECT 6.0 wireless technology from up to 160′ indoors.

The handset places and receives calls, displaying each on its LCD while providing buttons for redial and speakerphone. It can recall up to 30 received calls and record up to 50 phone numbers.

The iPhone Cordless Handset is available from Hammacher Schlemmer for $159.95.

Go old school with your smartphones by hooking it up with the Retro Phone Handset. If you prefer the whole package (and by that, we mean an entire vintage telephone handset for your phone), then maybe the iPhone Cordless Handset will be more your style. But […]

Where the retro sixties look meets high-tech gadgetry, you get the Sagemcom Sixty Cordless Telephone.  The Sixty as they call it, is a very cool looking cordless phone that offers a sleek modern day rendition of the 60’s style rotary dial telephone.  Packed with high-tech […]

If you’re like most of us you probably use your smartphone for just about everything, but sometimes you need a break. The ePure Mobile Bluetooth Station for iPhone ensures that even when you’re charging your phone you’ll be able to take advantage of all its […]

For zombie fighting, you need a chainsaw. But it can be difficult to justify the purchase of a chainsaw to yourself, let alone a significant other, when you only want it to be prepared for the zombie apocalypse. However, the Black & Decker NLP1800 Alligator […]

Are you ready to pretend like you and your swanky iPhone are a hardnosed trucker rambling on your CB radio as yuppies in there Priuses cut you off all day? If so, the CB Radio iPhone Handset will give you that authentic look and feel […]

For all you bluetooth lovers out there, here is a different but fun Bluetooth Banana Handset.  This 2.4GHZ banana bluetooth is great way to standout from the everyday crowd and express yourself.  Going bananas will have a whole new meaning now.  The kit comes with […]

As anyone suffering a cold winter will tell you, taking phone calls on a touch phone just isn’t the same in the winter. When your fingers are cold you lose dexterity in them and it’s downhill from there. The Bluetooth Handset Gloves will solve those […]

Steampunk fans looking for a little retro action will appreciate this Victorian Retro Phone Handset. Just plug it into any phone that has a 3.5mm jack and you’ll be on your way to enjoying your calls in Victorian era style. The Victorian Handset measures roughly […]

Although this device has multiple functions, surprisingly “telephone” is not one of them. Yes, it make look just like a retro desktop telephone, but you can’t answer this USB Retro Telephone Light with Alarm Clock. Instead, plug it into a USB port to power the […]

Retro looks are always cool, but add modern technology and you got yourself a real winner. The new line Pyle Retro Rotary Smartphone Stations are designed to give your home a retro feel. They feature simple-to-use buttons for answering landlines and smartphone calls and work […]

There are many people I know who somehow can’t seem to let go of the past. For example, my dad got an iPhone 4 last year for his birthday but sometimes he complains that it’s hard to use and that he’d rather it had a […]