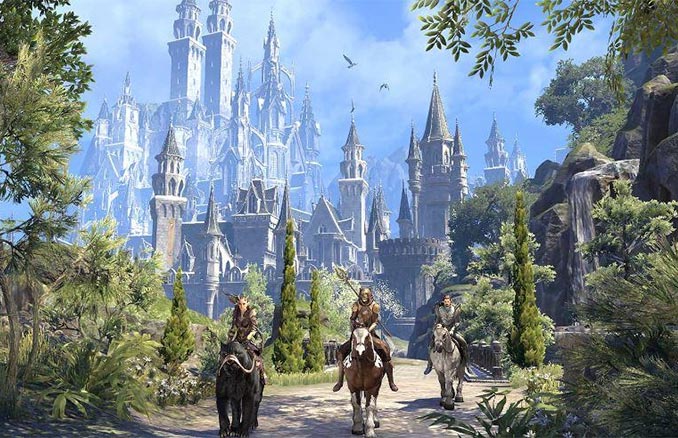 Watch the new The Elder Scrolls Online: Journey to Summerset Trailer to learn more about this ancient land and the dangers that await that wasn’t shown in the Summerset Cinematic and Gameplay Trailers. PC/Mac early access for this game will start on May 21, 2018, with the PlayStation 4 and Xbox One release two weeks later on June 5.

Summerset Isle is a land like no other in Tamriel, and its beauty and ancient history stands ready to be explored by you and your allies in The Elder Scrolls Online’s latest Chapter. Experience the wonder and spectacle of the home of the High Elves and uncover the dangers and mysteries that lie in store. Prepare yourself for a new adventure on the Isle of Summerset!

Pre-purchase The Elder Scrolls Online: Summerset now to immediately receive the Nightmare Senche Mount and a bonus copy of the Morrowind Chapter, plus get the Queen’s Bounty Pack and its unique digital rewards, including the Court of Bedlam costume, Pocket Salamander pet, and more, once Summerset launches. The Elder Scrolls Online: Summerset will be available on Xbox One and PlayStation 4 on June 5, 2018, with PC/Mac early access starting on May 21.

The Elder Scrolls V: Skyrim Tin Tote celebrates the hit video game and lets you pack a lunch in style. It has some of the most iconic characters, artwork, and imagery from the land of Skyrim right on the outside. It also features anti-rust coating […]

These Batman Fair Isle Unisex Lounge Pants will display your allegiance to the dark knight and keep you comfy all day long. Fair Isle refers to the name of the knitting technique that creates the signature pattern on Christmas sweaters years ago. It features a […]

These Nightmare Before Christmas Fair Isle Boot Slippers are Faux fur lined, fair isle style, boots. They have Jack Skellington’s face all up the ankle. Keep warm and toasty this winter with Jack. They make a great gift. Someone’s feet will thank you. Nightmare Before […]

You can wear a cardigan because (like bow ties), they’re cool now, especially when we’re talking about the Doctor Who Fair Isle Open Plus Size Cardigan. When the air starts to get so chilly that you start looking for evil killer snowmen lurking about, it’s […]