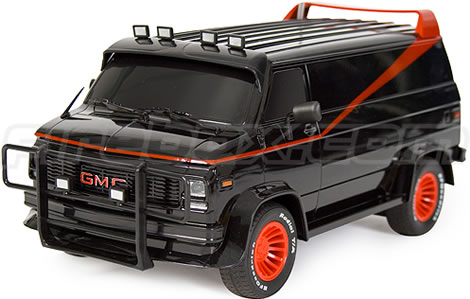 Fans of the 80s action adventure television series “The A-Team” can now get their hands on a radio-controlled model of the vehicle used by Hannibal, B. A. Baracus and the rest of the crew.

Get to grips with the twin toggle transmitter and you’ll soon be whizzing around shouting ‘I pity the fool!’ as you attempt to outrun the imaginary forces of Colonel Decker.

With its characteristic red stripe and fabulously pointless rooftop spoiler, the A-Team R/C Van is more than a souped-up mercenary mobile; it’s an icon of vehicular pop culture.

The fully-licensed The A-Team R/C Van is available from the firebox.com website for £24.95 (about $41 USD).

You have to love those old Volkswagen camper vans. They are such a vehicle of their time and they transported countless hippies to countless love-fests and festivals. And now LEGO is honoring the vehicle with this LEGO Volkswagen T1 Camper Van set.

We posted about this Lego VW Camper Van a while back, when it was first announced. Many people liked that post, so we wanted to alert you that today the Lego Volkswagen T1 Camper Van #10220 went on sale at LegoShop. I don’t know what […]

Planning to go camping any time soon? If you’re going with some other people, then obviously the all-in-one JakPak can’t cut it. But there’s no need to rough it out and sleep side-by-side and stuck to one another like sardines, not when you’ve got the VW […]

We recently posted about the new VW T1 Camper Van Lego Set and it was nearly as popular as the Camper Van Tent we posted about in the Spring. Maybe we have a lot of hippies reading GeekAlerts 🙂 or maybe this popularity is simply […]

Children of the 80s, it’s time to celebrate like it’s 1988 because the Jean-Claude Van Damme Action Figure has arrived… and it’s ready to cause some Van Damage. For me, it started with Bloodsport. Sure, the Muscles from Brussels had been in a couple of […]

Fans of VW Camper vans who also like birds will want to check out this Camper Van Birdhouse. It will make seed-eating hippies out of all your fine feathered friends. You might as well, you already have the LEGO set and the iPhone skin. Your […]

This radio-controlled Volkswagen Samba replica is equipped with a built-in speaker, allowing you to connect the toy to MP3 players, PDAs and other digital products using a standard 3.5mm stereo audio plug.