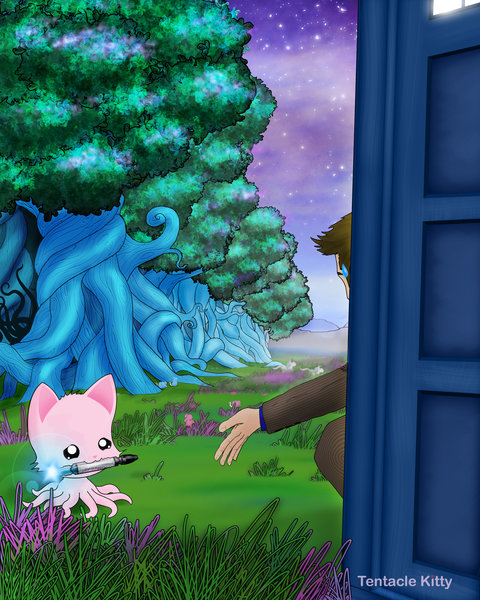 The Doctor’s having a rough time as he tries to coax a cute interdimensional creature into returning something important on the Tentacle Kitty and the Screwdriver Poster.

The Doctor – Time Lord who travels through time and space in search of adventure and knowledge.

Tentacle Kitty – A kitty with tentacles from another dimension.

When these two forces collide… well, let’s just say the universe won’t be in danger.

The poster, available in various sizes and finishes, features a naughty tentacle kitty holding the Doctor’s sonic screwdriver as he tries to talk her into giving it back. Have you ever tried to talk a cat into handing something over? It would probably be easier for the Doctor to stop a Dalek/Cyberman war.

The Tentacle Kitty and the Screwdriver Poster is available for $3.83 – $24.95 at deviantart.com.

Blasted barnacles! What’s this humongous thing where my arm used to be? I might be more than just a little inspired with all this pirate talk having just watched The Adventures of Tin Tin last night at the cinema. But really, you don’t have to […]

Handcrafted and designed by Odd Art Fabrications, the Tentacle Doorstop is sure to put a smile on the face of any sci-fi fan. Stick it under your office door and watch as the Cthulhu fans and Jules Verne fans flock to your area to see […]

A lot of those stick-on mustaches look good from far away, but it’s pretty clear that they aren’t real when you get up close and personal. And if they’re just too out there to look real (like the Hipster Mustache and Jumbo Novelty Mustache), then […]