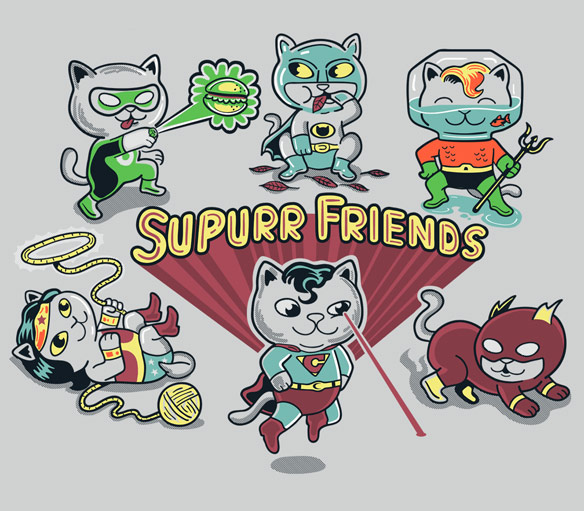 In a world where cats are the dominant species, a select group of felines, as depicted on the Supurrrr Friends T-Shirt, come together to use their various powers to defend their world against the threat of dogs and catnip shortages.

Popular DC Comics superheroes get an interesting twist when mashed-up with cats, offering a new look at once-familiar characters. Wonder Woman has forgotten all about the bad guys because her golden ball of yarn is too much fun to ignore. Superman is putting his heat vision to good use by creating one of those pesky laser dots on the floor, although Flash seems to think he’ll be fast enough to catch it.

Green Lantern has figured out how to make his ring create a cheezburger. Batman seems to be finishing off a feathery meal, although I don’t see Rob… Oh. Anyway, moving right along, Aquaman seems very content with his fishbowl helmet, and maybe his little fishy friend won’t suffer the same fate as Batman’s former sidekick.

Hal Jordan gets angry on the Green Lantern All Over Gothic Print T-Shirt, and all the bad guys better fear this Green Lantern’s light. It looks like Hal Jordan might be getting ready to summon a big ol’ green fist and lay some serious smackdown […]