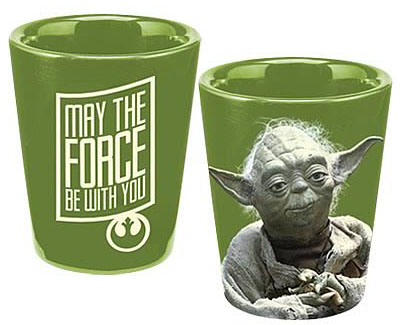 People drink for many reasons. One is to drown their sorrows or forget their worries (albeit temporarily.) Another is to bond or have a good time with friends. And there’s also those who just love drinking, just because. If you and your friends enjoy a good drink now and then and happen to be fans of Star Wars, then you may want to get a set of these Star Wars Yoda May The Force Be With You Ceramic Shot Glasses.

The Star Wars Yoda May The Force Be With You Ceramic Shot Glass features Yoda on one side and the iconic text that everyone associates with the movie franchise on the other.

Star Wars is an epic space opera franchise conceived by George Lucas. The first film in the franchise was originally released on May 25, 1977, by 20th Century Fox, and became a worldwide pop culture phenomenon, spawning two immediate sequels, released at three-year intervals. Sixteen years after the release of the trilogy’s final film, the first in a new prequel trilogy of films was released, again released at three-year intervals, with the final film released on May 19, 2005.

This Yoda “May The Force Be With You” ceramic shot glass features distinct design on front and back. Dishwasher safe. Measures 2 1/2-inches tall x 2-inches round.

The Star Wars Yoda May The Force Be With You Ceramic Shot Glass is available online from Entertainment Earth for $3.99.

Those into video games may opt to get the Pac-Man Shot Glass 4-Pack instead, while fans of Tim Burton might like the Nightmare Before Christmas Jack & Sally Shot Glasses better.

Those big, red Solo cups are a familiar sight at picnics and backyard BBQ’s, holding everything from cola to your favorite booze. For many of us, they are immediately associated with college keggers and house parties. That classic look has been captured in miniature form […]