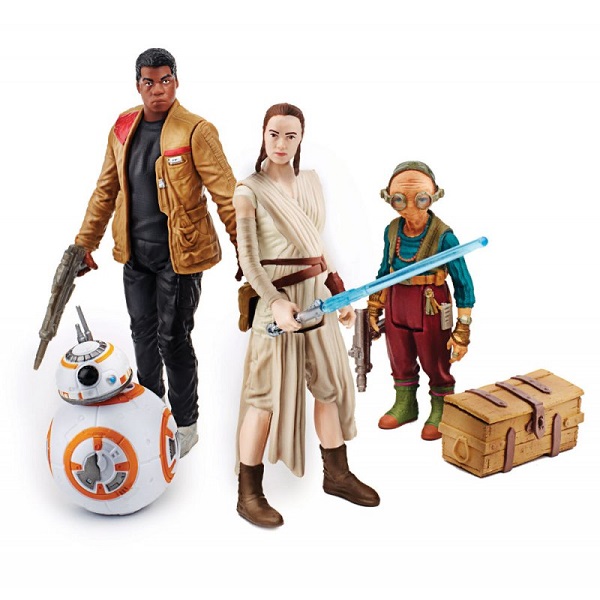 Rey takes her first steps towards becoming a Jedi on the planet of Takodana when Han Solo takes her, Finn, and BB-8 there to see an old friend, and that friend is what makes this action figure set so very cool because it finally offers you the chance to get your hands on sorta-cute and very wise Maz Kanata, who happens to have a thing for a certain Wookie.

Unfortunately, Chewbacca isn’t included with this collection but you do get 3 3/4-inch scale versions of Rey, Finn, BB-8, and Maz, along with Luke Skywalker’s lost lightsaber and the wooden trunk it was stored in. Rey isn’t the only one armed though because Finn and Maz each have a blaster, and BB-8 is armed with unbeatable cuteness.

The Star Wars The Force Awakens Takodana Encounter Action Figures will be available April 2016 but they can be pre-ordered now for $26.99 at Entertainment Earth.

Her past is a mystery but that doesn’t stop you from getting your hands on the Star Wars: The Force Awakens Maz Kanata Pop! Vinyl Figure. She’s no Jedi but she knows the Force, and she also knows a good Wookie when she sees one. […]

Rey takes her first steps towards becoming a Jedi with the Star Wars: The Force Awakens Rey with Lightsaber Pop! Vinyl Figure. Was Rey a student at Luke Skywalker’s Jedi Academy? Did she see the massacre brought about by Kylo Ren? Perhaps we’ll find out […]

He’s not Ron Burgundy but Finn lives up to the hype on the Star Wars: The Force Awakens ‘Big Deal’ T-Shirt. It’s hard to earn trust when you tell people you used to be a stormtrooper with the First Order but Finn takes it to […]