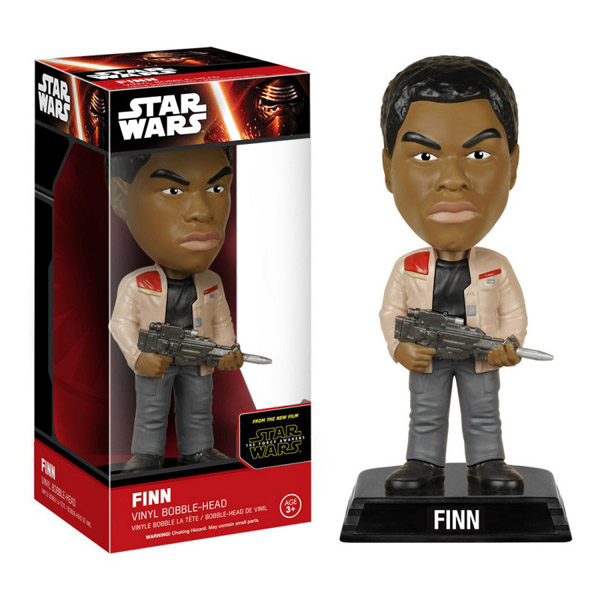 A traitor is revealed with the Star Wars The Force Awakens Finn Bobble Head, but since he’s betraying the First Order, it’s okay.

When we first saw Finn in the trailer for Star Wars: The Force Awakens, he was wearing stormtrooper armor, which was slightly shocking since we already knew he was a main character. Fortunately, he soon ditched the white First Order wardrobe for something a little more Resistance-looking. He was born to do one thing, but that doesn’t mean his skills can’t be used to help the other side.

Standing 7-inches tall, Finn is dressed in his non-bad-guy clothes and toting a blaster, ready to help his new friends do what needs to be done.

The Star Wars The Force Awakens Finn Bobble Head is available for $12.99 at Entertainment Earth.

You won’t have to scavenge through wrecked spaceships to get your hands on the Star Wars The Force Awakens Rey Bobble Head. Made strong by the harsh conditions of the planet Jakku, Rey makes her way through life as a desert scavenger… until she crosses […]

The bad guy from the new Star wars figure wants a place on your desk. This Star Wars: Episode VII – The Force Awakens Kylo Ren Bobble Head will keep you company as it nods and agrees with everything you say. Kylo Ren is a […]

Does the Star Wars The Last Jedi Finn Funko Pop Bobble Head reveal that a new hero becomes a new villain? Actually, since Finn was first introduced wearing the armor of a stormtrooper, he’d be going from villain to hero and back to villain… but […]

This Star Wars The Force Awakens Finn Mini Bust depicts Finn sporting his “borrowed” resistance jacket and armed with a blaster rifle. Finn is ready for action and ready to take on the First Order. It is an amazingly detailed mini bust that has been […]