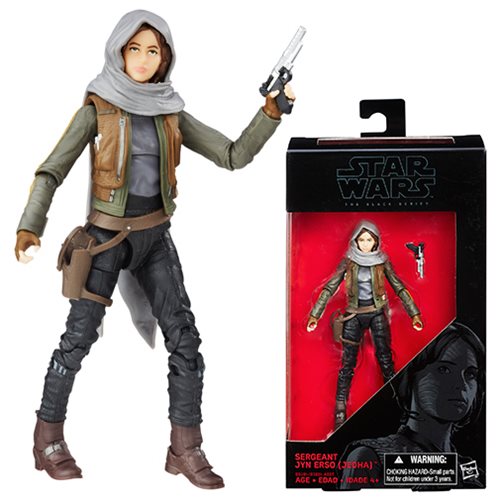 The Star Wars Rogue One The Black Series Jyn Erso (Jedha) 6-Inch Action Figure brings us a hero from a longer time ago, in a galaxy far, far away.

Before Luke Skywalker’s fateful encounter with two droids on the run from the Empire, a ragtag team of rebels was sent on a mission to learn about a secret Imperial weapon that all Star Wars fans know is the Death Star.

Standing 6-inches tall, the leader of this group, Jyn Erso, is armed with a blaster and dressed in the outfit she wears while on the planet, Jedha.

The Star Wars Rogue One The Black Series Jyn Erso (Jedha) 6-Inch Action Figure will be available later this month but it can be pre-ordered now for $20.99 at Entertainment Earth.

Get in touch with your inner Jyn Erso with the Star Wars Rogue One Jyn Erso Stormtrooper Doll. We’re talking about the kid version of Jyn, of course, before she grew up and became a rebel. Once upon a time ago, little Jyn Erso had […]

The Star Wars Rogue One Jyn Erso Mini Bust is amazingly detailed and is digitally sculpted using top of the line 3D software. It captures every detail. This 1:6 scale bust stands about 6 1/2-inches tall. Freshly recruited to the Rebel Alliance, Jyn Erso’s first […]

Let everyone know you’re a rebel with the Jyn Death Star Defiance Graphic T-Shirt. Before Luke Skywalker took off into space with a crazy old man and a cocky smuggler, a group of Rebels risked their lives to get the blueprints for the Empire’s secret […]