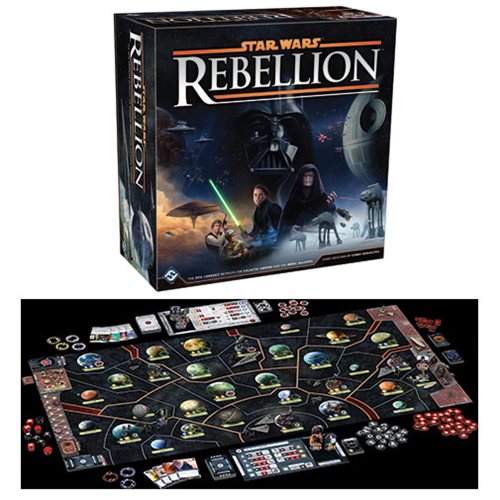 The Star Wars Rebellion Strategy Board Game lets you take part in the epic conflict between the Galactic Empire and Rebel Alliance! The Galactic Civil War awaits.

You control the Galactic Empire or the fledgling Rebel Alliance. You will command starships, account for troop movements, and rally systems to your cause. the winner takes the galaxy. Your success will depend upon the strength of your starships, vehicles, and troops, as well as individual efforts from Leia Organa, Mon Mothma, Grand Moff Tarkin, and Emperor Palpatine.

This Support the Troops Stormtrooper T-Shirt reminds us just how much fun it is to think of Star Wars themes as they relate to real life. Although we don’t hear much about supporting the troops the last few years–probably because we don’t see war protests […]

In tribute to Carrie Fisher’s last appearance as Leia in Star Wars: The Last Jedi comes the Star Wars The Last Jedi Leia Organa Sixth-Scale Figure. Standing a little over 11-inches tall, the daughter of Darth Vader (and the mother of Kylo Ren) is outfitted […]

Relive the excitement of the star wars saga in the Star Wars Empire vs Rebellion Card Game. You can take command of the unlimited resources of the Galactic Empire or the Rebel Alliance with this fun card game. This 2 player card game will have […]

Well, Grand Theft Auto V is out finally and if you want to know the ins and outs of the game, you’ll need this Grand Theft Auto V Limited Edition Strategy Guide Hardcover Book. It includes custom art created specifically for the limited edition and […]