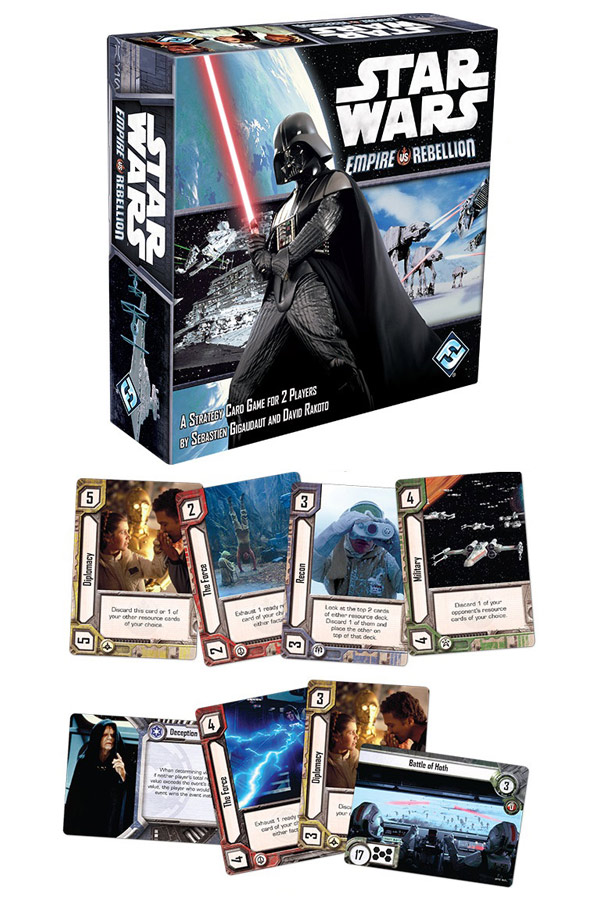 Relive the excitement of the star wars saga in the Star Wars Empire vs Rebellion Card Game. You can take command of the unlimited resources of the Galactic Empire or the Rebel Alliance with this fun card game.

This 2 player card game will have you and your opponent matching wits and resources in a struggle during a key event from the Galactic Civil War. As you use your resources, characters from the Star Wars saga can have powerful effects on the outcome of the struggle. These characters shape every struggle they enter.

Strategy cards are secretly chosen at the beginning of each round and can help you claim victory from the most unlikely scenarios, adding an element of surprise. Win enough struggles for the Empire or the Rebellion and you are victorious. Only $12.99 from Entertainment Earth. Pre-order it now for April.

These cool Join the Rebellion Active Leggings will help you keep active and stay comfy. You are going to look great in these while you have lightsaber battles. They have the phrase “Join the Rebellion” on the leg. Look good while fighting the Empire. Join […]

This Join the Rebellion Unisex Cardigan is a cool piece of clothing and also a recruitment poster. It features varsity-style RBL letters on the chest and the Join the Rebellion design screen-printed on back. Wear it proudly and advertise the rebellion. Star Wars Join the […]

Boba Fett? Where? Not here because the Star Wars Rebels Join The Rebellion T-Shirt features a new Mandalorian warrior that’s blasting her way into the hearts of Star Wars fans. In Star Wars: Rebels, colorful Sabine Wren is as talented with a paint gun as […]