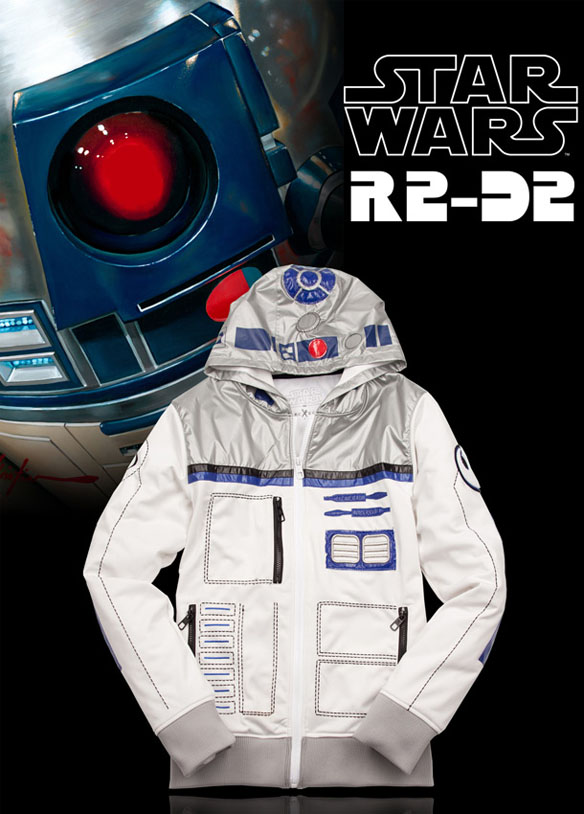 By now you’ve seen the cool Star Wars Jackets by Marc Ecko: Chewbacca, Imperial TIE Fighter, X-Wing Pilot and AT-AT Themed. If you’ve been holding out for that special droid, the wait is over.

The Star Wars R2-D2 Jacket by Marc Ecko will have R2-D2 fans in awe. Like the rest of the jackets by Ecko, Artoo is highly detailed and officially licensed. The outer shell is modeled after R2-D2 and features three front zipper pockets fashioned from droid parts, a Rebel Alliance patch on the arm and a hood resembling R2-D2’s own round dome.

Get wired up with this exclusive R2-D2 Jacket from the Marc Ecko Cut & Sew Star Wars collection. Modeled from the droid himself, this hoodie crafts pockets out of robot controls and blends fabric for a space-tech and style combo. Perfect fan tribute to the best of the bots.

Varsity jackets are cool high school mementos for jocks, but what about something for the not so athletically gifted geeks? This Star Wars Boba Fett Varsity Jacket by Marc Ecko should solve that problem. Made from a blend of 65% wool and 35% viscose melton, […]

The Empire Strikes Back is a favorite of many Star Wars fans. You have the Battle of Hoth and the monstrous Wampa, training on Dagobah with Yoda, Vader revealing himself to Luke and chopping Luke’s hand off, and so much more…A classic! The Battle of […]

Finally someone has us covered. Working those late nights will never be the same now that you can enjoy a drink as you do your work. The i-Ecko 2GB USB Bottle Opener has plenty of storage space to justify the social need for it. Don’t […]

GeekAlerts has shown your Marc Ecko’s handy work before, with the Star Wars X Wing Pilot Hoodie, and now we’ve got another good one. If you love the Imperial Fighter pilots from the Star Wars movies, you are going to love this Star Wars Imperial […]

At the moment, there is still about an hour left to win a free Microfiber Electronics Cleaning Cloth, and there are only 41 entries so far. This means you have excellent odds of winning. We also have two huge giveaways coming up soon. Make sure […]