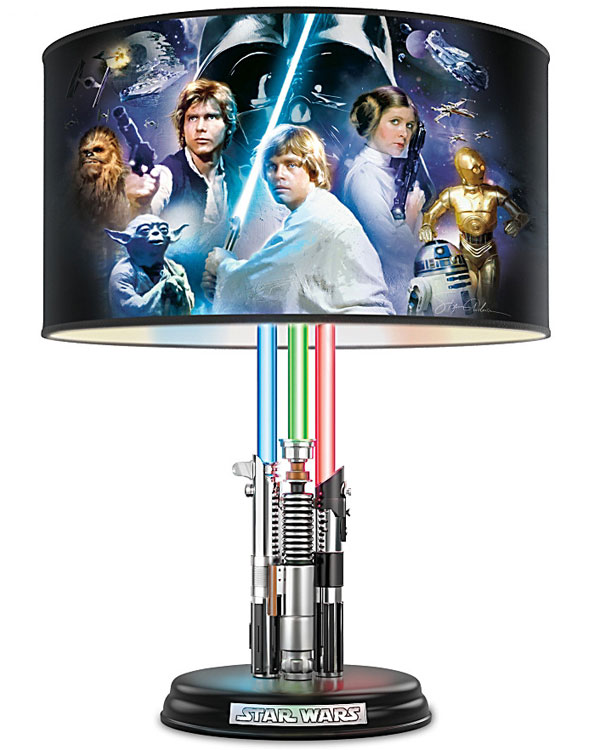 Feel the power of the Force with the Star Wars Original Trilogy Lamp With Illuminated Lightsabers.

Aside from Samuel L. Jackson getting a purple lightsaber because he’s Samuel L. Jackson, this ancient weapon of the Star Wars universe is usually seen in one of three colors: Red, Blue, or Green. Luke Skywalker himself has wielded two of the colors, with the blue blade being (sort of) passed down by his father, and then his own green lightsaber. Of course, everyone knows all the bad guys use red lightsabers.

This 18-inch tall lamp features not one, not two, but THREE lightsabers on the base, and you have the option of turning on just the lamp itself, just the lightsabers, or the lamp and lightsabers at the same time. The artwork on the custom-crafted barrel lampshade was created by famed Star Wars artist Steve Anderson.

The Star Wars Original Trilogy Lamp With Illuminated Lightsabers will be available December 7, 2015 but it can be pre-ordered now for $199.95 at The Bradford Exchange.

The only thing better than toy lightsabers are toy lightsabers with M&Ms. Use the force and eat the candy with these cool lightsaber toys. The M&Ms will melt in your mouth and not in your lightsaber hand and that will prevent slippage during an epic […]

That’s not a lava lamp. Now that’s a lava lamp. The Mathmos Monster Lava Lamp on steroids commands attention in any room, be it your man cave, bar, party room or bachelor pad. The lava lamp that first surfaced about 50 years ago has not since lost its […]

Fans of the Star Wars saga can now light up their workspace using the weapon of a Jedi. The 13 inches tall desktop lamp, designed like a lightsaber, is charged via USB.

If you have a knack of building your own stuff and are a true blue Star Wars fan, then you already know what a lightsaber is. In fact, there are a lot of lightsabers on sale nowadays in a variety of forms and sizes, one […]

These Star Wars Lightsabers Dress Socks are awesome. Why? Because they feature a lightsaber duel on them. Luke Skywalker and Darth Vader will go at it all day as you wear them. One size fits most. These socks make a great gift for the Star […]