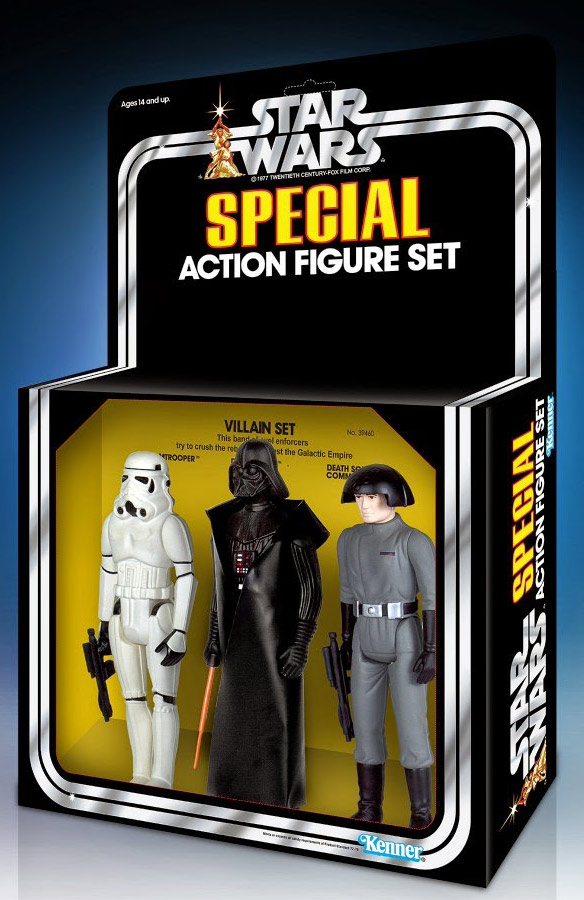 Can you hear the Imperial March playing in your head? You should because the Star Wars Jumbo Villain Kenner Action Figure Special Set has three iconic characters from the Star Wars universe that people love to boo and hiss at.

Standing 12-inches tall and digitally scanned from mint 3 3/4-inch scale Kenner originals, these super-sized action figures are perfect for the Star Wars collector. The set includes Darth Vader, a Stormtrooper, and a Death Squad Commander. Vader comes with his cape and lightsaber, and the Stormtrooper and Death Squad Commander each have a blaster.

The Star Wars Jumbo Villain Kenner Action Figure Special Set will be available March 2016 but it can be pre-ordered now for $199.99 at Entertainment Earth. Also at Forbiddenplanet.com.

These Star Wars Jumbo Vintage Early Bird Kit Kenner Action Figures are a 4-pack that contains Jumbo Luke Skywalker, Princess Leia, Chewbacca, and R2-D2 with accessories. It comes in a retro box that mimics the original Early Bird envelope. It includes stickers and a foldout […]

When I was a kid R5-D4 was one of my favorite action figures. I would love to buy and display this Star Wars R5-D4 Jumbo Vintage Kenner Action Figure. It looks even neater when it is larger. This is the vintage Kenner figure in a […]

Now is your chance to own a giant Wampa. Well, not a real one, but a giant action figure version. This Star Wars Wampa Jumbo Vintage Kenner Action Figure was digitally scanned from mint 6-inch Kenner originals and this Jumbo figure measures 22-inches tall. The […]

What could be better than the original vintage R2-D2 Action figure from Kenner? A giant version, that’s what. That is exactly what the Star Wars R2-D2 Jumbo Vintage Kenner Action Figure is. An oversized version of the classic toy.

Do you like your Star Wars action figures giant sized? Bigger is always better. This Star Wars Princess Leia Organa in Boushh Disguise Jumbo Kenner Action Figure is just like the one you had as a kid, only bigger! This 12-inch tall reproduction of Princess […]

This Star Wars Luke Skywalker Jedi Knight Jumbo Vintage Kenner Action Figure was digitally scanned from mint 3 3/4-inch Kenner originals, but this one stands 12-inches tall! It includes a lightsaber, blaster, and cloak – just like the original. Luke is dressed for his final […]