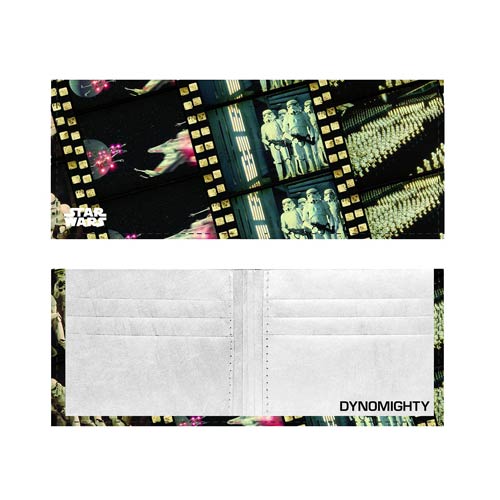 It also has an awesome scene from the film on the outside. It is engineered to be thinner, lighter and stronger than a standard leather wallet. And obviously engineered to look far cooler too. It looks stunning.

Only $22.99 from Entertainment Earth.

This Jaws Billfold Wallet is a great reminder that the ocean is not a safe place. Bruce the shark is a great guardian for your cash and cards. He will bite any hand that tries to get in. Except yours of course. The front features […]

If you’re like my dad, or most men for the matter, then you don’t really like carrying around a lot of cash in your wallet. It’s either that, or your money isn’t even in your wallet; it’s just rolled up with a rubber band wrapped […]

Here’s another quirky wallet for the ages, but this isn’t one I’d recommend for people who live in areas with high crime rates. Or for people who go out in highly populated areas like malls either. In fact, I wouldn’t really recommend this wallet to […]

Are those strips of bacon I see in your back pocket? Now who in their right mind would carry around some bacon in their pocket? Apparently, the ultimate bacon lover as well as someone who’s a fan of quirky wallets, because that ain’t real meat […]

This Spellbook Billfold is surely how witches and warlocks carry their important essentials. It features 4 bill-sized pockets (one behind each card section, two in zipped section). It also has see-thru ID slot with thumb assist + 14 additional card slots. Has it already cast […]

We’ve showcased some pretty snazzy wallets before, like the iWallet, Space Invaders Duct Tape Wallet, and Toast Wallet.  No ordinary wallets dare be seen on GeekAlerts! Here’s another “mighty” fine wallet that has earned its spot in the GA Spring wallet lineup. It’s extremely durable, comes in all different styles and colors, and it’s anything but […]

Ever feel like screaming when you have to open your wallet and whip out some cash? Now you can let the Sonic Wallets do the screaming for you, although you’re still responsible for any money exchanging hands. These noise-making money holders come in a variety […]

GeekAlerts has shown you Dynomighty Mighty Wallets in the past, but this Dot Matrix Pi Mighty Wallet is perfect for fans that like to celebrate pi all year round. Made from Tyvek, this wallet is tear resistant and features a stitchless design that allows the […]