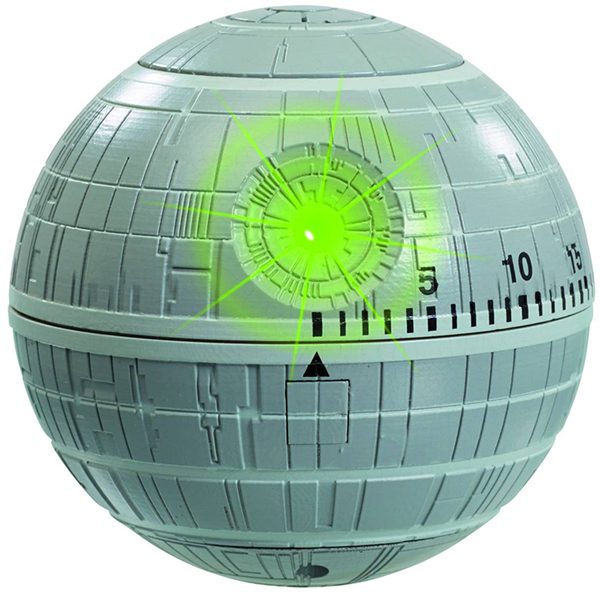 That’s no moon. That’s the Star Wars Death Star Kitchen Timer, and it’s ready to unleash its planet-destroying power in your kitchen.

Just rotate the top hemisphere to the required time to start the countdown (up to 60 minutes), and when the timer reaches zero, the planet with the rebel base goes BOOM!

Oh, wait. That’s not quite right. When the timer reaches zero, it flashes the super-cannon LED light and plays the associated sound effect. Not as dramatic as a planet blowing up, but much safer for working in the kitchen.

Update 2018: This item is out of stock at the merchants above, but SuperHeroStuff has what appears to be the same item (except with updated packaging) for $24.99.

One of my favorite moves of all time is The Italian Job. There’s just something about the whole team coming together and working hand in hand to get the job done. My favorite character was the safe cracker. I just think the role is extra […]

The Star Wars BB-8 Kitchen Timer will be a real help in the kitchen. Whether you are baking a pie or timing dinner, there is no droid that you can trust more than BB-8. This timer features lights and sounds from the movie that signal […]

What better timer to use when you’re whipping up some sweet treats in your kitchen than with the Kitchen Mixer Timer? It’s basically a miniature version of a mixer that you’ve probably got on your kitchen table or in one of your cupboards. Just turn […]