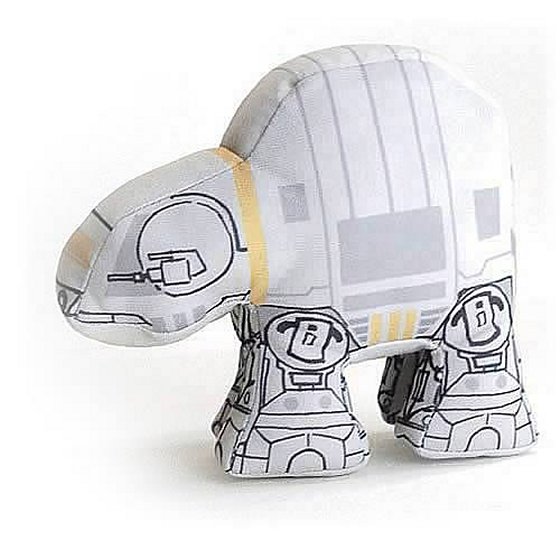 One of the coolest moments in The Empire Strikes Back is when the AT-ATs arrive on the scene. Star Wars fans have to have at least one version of this amazing walker in their collection. You could get yourself a 2 foot tall Star Wars Super Deluxe AT-AT if you want realism, or you could opt for this adorable Deformed Plush AT-AT, which gives you something to cuddle with at night.

Luke may have had to take a few of these bad boys down in the movie, but that doesn’t mean they can’t be cute and cuddly. If Imperial Walkers had been designed like this from the start, the Empire would have chilled a little. How can you do mean things when you have these guys?

If you like the idea of making the Empire’s machines a little less threatening, you can pre-order this now from Entertainment Earth for just $12.99.

This Star Wars TIE Fighter Super Deformed Vehicle Plush is soft and cuddly. If a rebel pilot saw this thing flying toward him, he wouldn’t be scared at all. No one is scared of a plush vehicle, even if it does come from the Empire. […]

The Death Star is feared throughout the galaxy. Or at least it was until the rebel alliance destroyed it. Twice. Any space station that can destroy entire planets is something to instill terror into the hearts of all beings, Jedi and non-Jedi alike, but fear […]

The Star Wars Star Destroyer Super Deformed Vehicle Plush lets you experience the softer side of Star Wars. The Star Destroyer doesn’t look so imposing now does it? It probably looks scary to your other plush toys however. It still looks awesome. This squeezable and […]

As far as evil minions go, nothing beats the Stormtroopers. They are very sinister in their white armor as they do the Emperor’s bidding. Now you can experience the softer side of Stormtroopers with this Star Wars Stormtrooper Super Deformed Plush. This may be the […]

The Star Wars Empire’s Reign Hawaiian Shirt is covered with Imperial Star Destroyers and Imperial Crests. It’s the perfect shirt for fans of the Evil Empire. Who needs palm trees and surfers on their shirt? This is a geeky Hawaiian shirt that you will love. […]

Do you need a soft, huggable Time Lord to help you travel to Dreamland? The Doctor Who Cuddly Plush Tenth Time Traveler might be able to help, although he doesn’t have a plush TARDIS to help get you where you want to go. Make no […]