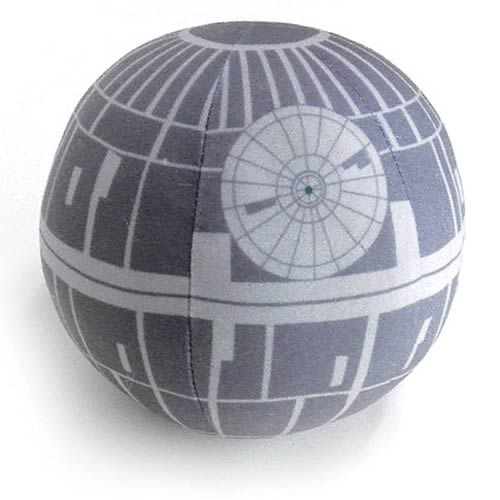 The Death Star is feared throughout the galaxy. Or at least it was until the rebel alliance destroyed it. Twice. Any space station that can destroy entire planets is something to instill terror into the hearts of all beings, Jedi and non-Jedi alike, but fear it no more. This Star Wars Death Star Super Deformed Vehicle Plush is more cute than terrifying.

Add the ultimate power in the universe to your Star Wars plush collection. This version is 7 inches around and rebels will want to hug it rather than attack it.

As an added cool factor, it also has a light-up tractor beam. This plush is too cool for just $12.99 from Entertainment Earth. Pre-order it now and get it in July.

This Star Wars TIE Fighter Super Deformed Vehicle Plush is soft and cuddly. If a rebel pilot saw this thing flying toward him, he wouldn’t be scared at all. No one is scared of a plush vehicle, even if it does come from the Empire. […]

The Star Wars Star Destroyer Super Deformed Vehicle Plush lets you experience the softer side of Star Wars. The Star Destroyer doesn’t look so imposing now does it? It probably looks scary to your other plush toys however. It still looks awesome. This squeezable and […]

One of the coolest moments in The Empire Strikes Back is when the AT-ATs arrive on the scene. Star Wars fans have to have at least one version of this amazing walker in their collection. You could get yourself a 2 foot tall Star Wars […]

As far as evil minions go, nothing beats the Stormtroopers. They are very sinister in their white armor as they do the Emperor’s bidding. Now you can experience the softer side of Stormtroopers with this Star Wars Stormtrooper Super Deformed Plush. This may be the […]