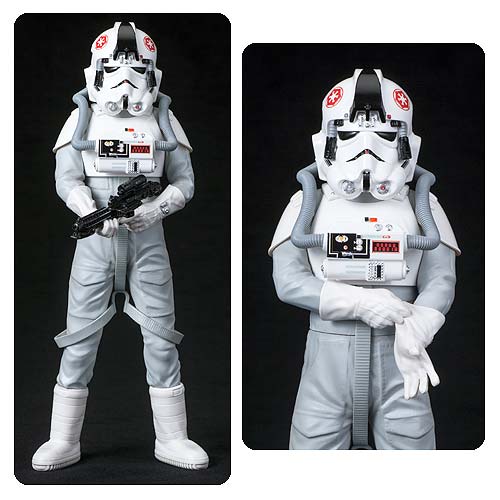 This Star Wars AT-AT Driver ArtFX+ Statue is awesome. He was one of my favorite Star wars figures as a kid, so I have to get this one.

AT-AT drivers are pilots that operate the Imperial Army’s AT-AT walkers. They were first seen on Hoth in Star Wars: Episode V – The Empire Strikes Back. All of the tiny details are here, like the commlink embedded in the glove, the readout on the chest, and much more. He even comes with 3 interchangeable arm parts so he can be customized putting on his gloves, wielding his blaster pistol, or standing at parade rest with his hands behind his back.

He stands just over 7-inches tall, with magnetic feet. This awesome figure is just $64.99 from Entertainment Earth. Pre-order it now for January.

The other day I saw a road rager blaring his horn and swearing like a drunken sailor. Why? Because a poor student driver driving a car with a huge ‘Student Driver’ sign on top was hesitating to make a right turn on red. The kid actually panicked and […]

Maybe you recall these fuzzy, striped USB Heated Warmer Gloves from not too long ago. They’re great because they reduce chilly air flow to your productive computer hands, provide cushioning for your palms, and improve blood circulation. Maybe for the cold-handed computer geekette in your life, these Floral USB […]

Meat. It’s delicious. It should be a part of every celebration. Now it can be thanks to this fun Meat Parade Wrapping Paper Gift Wrap. This wrapping paper is yummy. Imagine tearing into delicious images of meat as you try to unwrap your gift. This […]