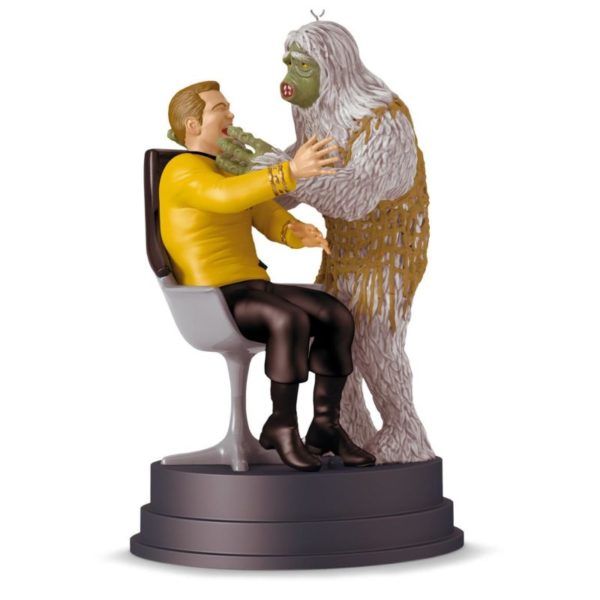 Nothing says Christmas like having the salt drained from your body. At least that’s the impression given by the Star Trek The Man Trap Kirk and Salt Monster Ornament With Sound.

Based on the first episode of Star Trek to air in 1966, The Man Trap, this 4.02-inch-tall ornament features Captain Kirk being attacked by the Salt Monster, leeching the salt from his body with its deadly touch.

Sure, it’s not as festive as candy canes or a Santa snowglobe but Star Trek fans will probably still prefer this, especially since it plays dialogue from the television show. All that’s missing is Dr. McCoy blasting the beast with his phaser.

The Star Trek The Man Trap Kirk and Salt Monster Ornament With Sound is available for $29.95 at Hallmark.

The Boba Fett Musical Snowglobe captures an iconic scene and recreates it with a holiday theme to make it more in tune with this Christmas season. Instead of wielding some sort of intimidating weapon, Boba Fett is instead holding a gigantic candy cane as a […]

If you misread the title of this post as Salt & Pepper, it is understandable. However, it is no typo but a cute bird-shaped Salt & Peeper salt and pepper shaker. Not only does it look adorable, it also is very practical because it is […]