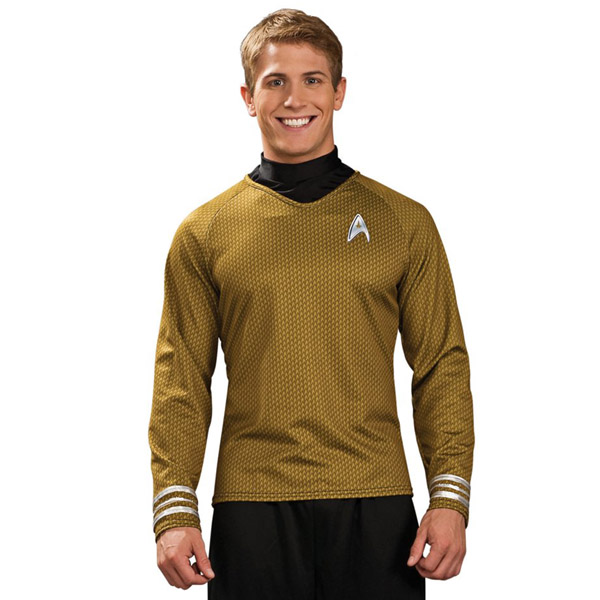 The Star Trek movie did an awesome thing by honoring the original series while still making iconic Trek clothing look fashionable, and the Star Trek Movie Captain Kirk Gold Shirt lets you unleash your inner Chris Pine as you picture yourself commanding the starship Enterprise.

Unlike the rather plain gold shirt worn by William Shatner, the new design of the Starfleet uniform, based on the clothing worn in J.J. Abrams’ Star Trek movie, features a cool-looking texture that will have everyone convinced that you have what it takes to save the universe from untold disasters. And if it turns out that you really can’t save the day, at least you’ll look cool as the world ends around you.

With this Star Trek The Original Series Captain Kirk Uniform Dog Shirt, your dog can ask you to beam some dog treats his way, because he is too lazy to move. Your dog can now be captain of the ship. He will look geeky and […]

Trade in your boring white bathrobe for one of these colorful, luxurious Star Trek Bathrobes. These officially licensed Star Trek bathrobes come in two versions: Captain Kirk gold or Spock blue. They are embroidered with the rank on the sleeves and the insignia over the […]

Set phasers to stun as you become the captain of your kitchen with the Star Trek Captain Kirk Apron. James T. Kirk might be known more for his bedroom skills and fly-by-the-seat-of-his-pants command gameplan but that doesn’t mean the man couldn’t cook. After all, he […]