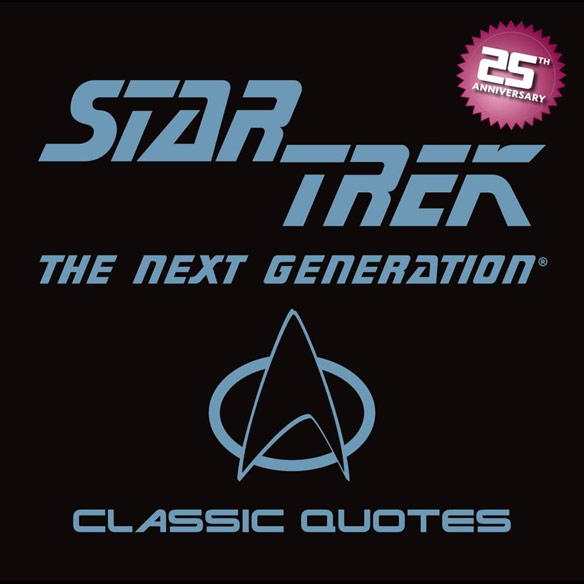 When something has as rich a history as Star Trek, many classic quotes are going to spring forth from it and this Star Trek Classic Quotes Book has all of the best.

This 25th Anniversary Tie-In Edition celebrates the popular television show that aired from 1987 to 1994. That crew explored strange worlds, sought out new life and new civilizations, and boldly went where no one had gone before. And they made some classic quotes along the way.

This book features full-color photographs and quotes from all seven seasons. It is only £7.50 from Forbidden Planet and $5.99 at Amazon.com. Pre-order it now and it will arrive in April.

This Star Trek Quotes Pint Glass Set is a great looking retro set of glassware. They feature some bold colors and quotes from your favorite Star Trek crew members. These glasses feature Captain Kirk, Spock, McCoy, and Scotty. They will look great in your cabinet […]

Archer is a classic animated show. I don’t know about you, but I’m a big fan. This show has so many funny quotes, you can’t fit them all on a pint glass, but they managed to put some of the best on this Archer Quotes […]

Star Trek To Boldly Go: Rare Photos from the TOS Season One

Boldly go where few have gone before with Star Trek To Boldly Go: Rare Photos from the TOS Soundstage – Season One, filled with over 300 rare, behind-the-scenes images from the pilot episode and first season of Star Trek. Gerald Gurian, a 40+ year collector […]

This Star Trek Quotes Shot Glass 4-Pack belongs in your Star Trek themed bar. Each glass has a quote from the original series. You get: Captain Kirk with “Set Phasers to Stun,” Mr. Spock and “Highly Illogical,” the U.S.S. Enterprise and “Space, the Final Frontier,” […]

Geek parents can’t help but pass their cultured wisdom onto their younglings. Sesame Street does a fine job of teaching kids about opposites, but what about Star Trek? With the Star Trek Book of Opposites book, your budding scholar will have a much clearer understanding of the yins and yangs […]

Doctor Who fans are so devoted to the long-running series that it’s not hard to find people capable of quoting lines from the show, and the Doctor Who TARDIS-Shaped Quotes Baby Tee lets your wardrobe show the same Whovian devotion. The Doctor always seems to […]

Familiar and different at the same time, The Star Wars Comic Book #1 (Forbidden Planet Variant) will show you a galaxy far, far away like you’ve never seen it before. Can you imagine Star Wars happening any other way than it did? Well, George Lucas […]