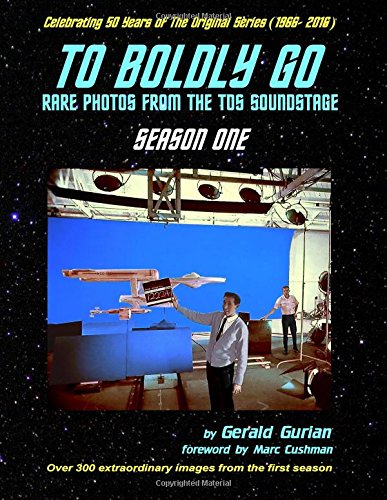 Boldly go where few have gone before with Star Trek To Boldly Go: Rare Photos from the TOS Soundstage – Season One, filled with over 300 rare, behind-the-scenes images from the pilot episode and first season of Star Trek.

Gerald Gurian, a 40+ year collector of screen-used Star Trek memorabilia, brings us a 218-page book filled with a collection of photographs that took over forty years to build, featuring eye-catching images that include behind-the-scenes action during filming, Leonard Nimoy posing with his Vulcan-eared son on the bridge of the Enterprise, Nichelle Nichols staying limber between missions, and William Shatner (along with Nimoy) posing with a trio of non-lethal-looking aliens in the Transporter Room.

Star Trek To Boldly Go: Rare Photos from the TOS Soundstage – Season One is available for $40 at Amazon.com.

This Star Trek: TOS Bridge Set Lamp is both the Star Trek bridge and a cool lamp. The lamp base is the bridge of ST:TOS’s U.S.S. Enterprise. You could put your own figures on that bridge and have a super cool display piece. Every time […]

These Star Trek TOS Pillows will look great on your couch or on your starship’s bridge. They come in Science Blue, Operations Gold, or Command Red, so any section of starfleet can have them. Rest your head on the division of your choice and dream […]

This Star Trek TOS Road Trip Sunshade will protect your car’s interior from the sun’s harsh rays and make it look awesome at the same time. It protects, cools, and blocks UV rays in your car. It features Kirk, Spock, McCoy, and Scotty from TOS, […]

These Star Trek TOS Vinyl Figures are cute and fun. Collect all of the Star Trek: The Original Series vinyl figures from Funko’s Pop! line. You can choose from the Andorian, Kirk, Klingon, Orion Slave Girl, Scotty, or Spock. These are going to look great […]

This Star Trek TOS Ships Holiday Sweater is an ugly holiday sweater done in ST:TOS style! It includes the U.S.S. Enterprise and Starfleet insignia. It is made of 100% cotton, 12 gauge knit. This sweater makes an excellent gift for the holidays, but you’ll want […]

These Star Trek inspired Boldly Go Capri Yoga Pants will let you boldly ease into Yoga poses in style. These Capri pants are perfect for fans of Star Trek. They feature the Enterprise on the right leg and the words “Boldly Go” on the back. […]

You probably already have an Enterprise sitting on your mantel, but I bet it isn’t “HD”. This Star Trek TOS Enterprise 1701 HD Ship is a 16″ Star Trek Enterprise replica with lights and sound effects. It also has High-Definition details that are screen accurate. […]