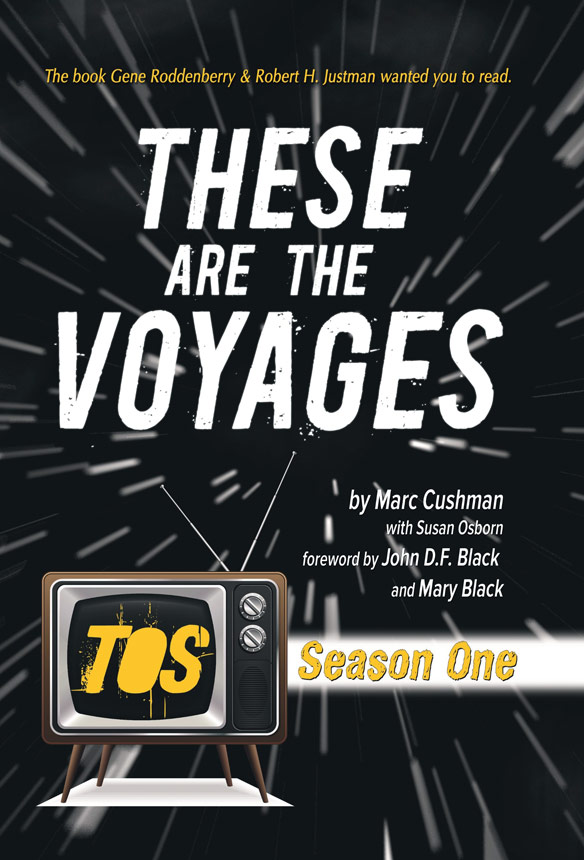 Boldly go where your knowledge of Star Trek will become as big as the universe itself with the These are the Voyages Star Trek TOS Season One Hardcover Book, and find out what it was like to work with Gene Roddenberry as the adventures of Captain Kirk and the crew of the Enterprise were brought to life for television.

After decades of research, hundreds of exclusive interviews, and the inclusion of thousands of documents, from story outlines to scripts to interoffice memos between Roddenberry and his creative staff, correspondences with NBC and Desilu Studios, production schedules, budgets, and even the Nielsen ratings for every episode of the first Star Trek series, These are the Voyages serves as a time machine, taking the reader back to witness the creation, writing and making of Star Trek.

Some of the things that will be learned are:

From now until the end of October, the These are the Voyages Star Trek TOS Season One Hardcover will be available for $27.95 at Amazon.com. After Halloween, the book goes back to its original retail price of $39.95.

Star Trek: The True Science Behind the Starship Voyages

If you were ever curious about the science behind Star trek, this Star Trek The Official Guide to Our Universe: The True Science Behind the Starship Voyages Hardcover Book is perfect for you. It reveals the real science behind Star Trek! Astronomy educator Andrew Fazekas […]

Star Trek To Boldly Go: Rare Photos from the TOS Season One

Boldly go where few have gone before with Star Trek To Boldly Go: Rare Photos from the TOS Soundstage – Season One, filled with over 300 rare, behind-the-scenes images from the pilot episode and first season of Star Trek. Gerald Gurian, a 40+ year collector […]

These Star Trek TOS Pillows will look great on your couch or on your starship’s bridge. They come in Science Blue, Operations Gold, or Command Red, so any section of starfleet can have them. Rest your head on the division of your choice and dream […]

This Star Trek TOS Road Trip Sunshade will protect your car’s interior from the sun’s harsh rays and make it look awesome at the same time. It protects, cools, and blocks UV rays in your car. It features Kirk, Spock, McCoy, and Scotty from TOS, […]

These Star Trek TOS Vinyl Figures are cute and fun. Collect all of the Star Trek: The Original Series vinyl figures from Funko’s Pop! line. You can choose from the Andorian, Kirk, Klingon, Orion Slave Girl, Scotty, or Spock. These are going to look great […]

This Star Trek TOS Ships Holiday Sweater is an ugly holiday sweater done in ST:TOS style! It includes the U.S.S. Enterprise and Starfleet insignia. It is made of 100% cotton, 12 gauge knit. This sweater makes an excellent gift for the holidays, but you’ll want […]

There’s just something about the design of the original Star Trek uniforms that makes them timeless. They have a simple clean design and are definitely a part of the era, but could be from anytime. Kirks uniform especially looks awesome. Why not dress up as […]