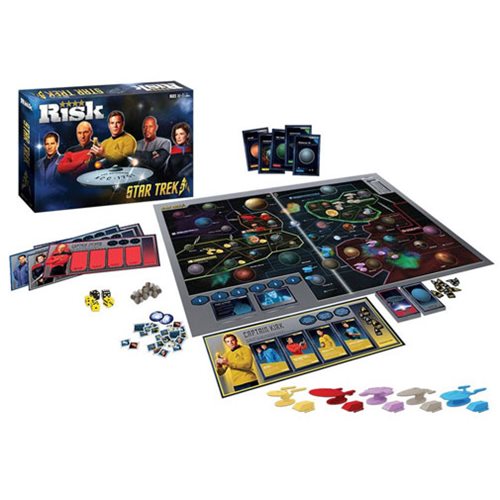 The Star Trek 50th Anniversary Risk blows away all other versions of the game. Q has brought together Captains Kirk, Picard, Sisko, Janeway, and Archer to see which of them would be the best commander in Starfleet.

You take on the role of a captain, assemble your away team, command your ships, and complete quests across the Galaxy. It comes with a Custom Game Board featuring Alpha and Beta Quadrants; 225 custom starships and shuttlecrafts; 5 Captain’s Logs; 44 Location Cards; 30 Crew Cards; 50 Q-Vent Cards; 14 Q’s Quests; 72 Alien Lifeform Tokens; 5 Manhunt Markers; 2 Wormholes; 107 Command Credits; 50 Tribbles; 5 Dice; and Game Guide.

$49.99 from Entertainment Earth. Pre-order it now for August.