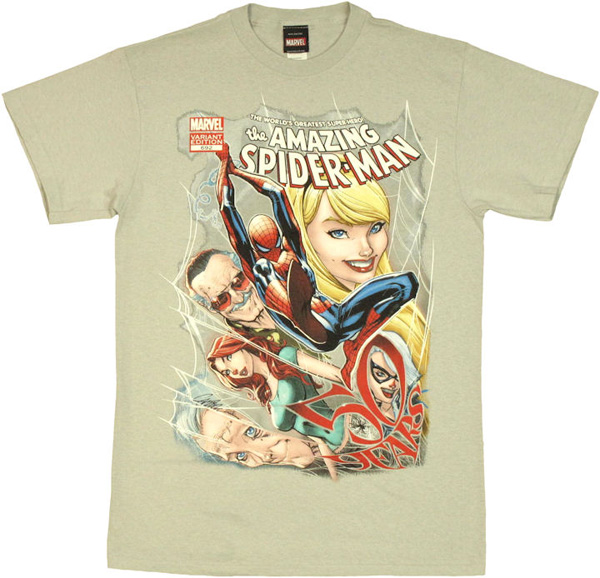 Did any of you comic geeks make it to Fan Expo Canada 2012? If not, I have some great news for you, especially if you’re a fan of Marvel Comics’ favorite webhead, because you can still get your hands on the Spiderman Fan Expo Variant T-Shirt.

The shirt, which was previously only available at Fan Expo Canada 2012, features artwork by J. Scott Campbell that was used as an alternate cover for the 50th anniversary issue of The Amazing Spider-Man, #692. In addition to the webslinger himself, we also get a look at all the women who have played major roles in Peter Parker’s life: Gwen Stacy, Mary Jane Watson, Black Cat and Aunt May.

And would it be an anniversary issue without having Stan Lee on there? I don’t think so, since he brought Spider-Man to life back in 1962.

Stop kicking yourself for not taking that trip to Canada and get the Spiderman Fan Expo Variant T-Shirt for $19.88 – $22.88 at StylinOnline.com.

Face it, Tiger. You just hit the jackpot with the sexy Mary Jane Polystone Statue, featuring Spider-Man’s favorite redhead striking a sexy pose. Peter Parker stretched the limits of imagination in the early days of the Spider-Man comics, and not because he had the proportionate […]

When it comes to hanging around, nobody does it better than Marvel’s favorite web-head, and the Amazing Spiderman Hang Time T-Shirt features the wall-crawler doing what he does best. The 100% cotton, brown t-shirt has a distressed print of Spiderman from the 2012 film, The […]

Wearing the Spiderman Spider Logo Overlay T-Shirt won’t let you do whatever a spider can but you’ll look stylish while vainly trying to climb a wall. One shirt. Two images. How cool is that? As cool as being able to swing through a neighborhood on […]

Everyone recognizes Spiderman’s familiar red-and-blue tights, but the wallcrawler was rocking a much darker look for a while and the Spiderman Black Suit Dye Sub T-Shirt lets you wear a stylish and artistic portrait of Peter Parker decked out in his black Spidey suit. The […]

Who has your back? Spider-Man has your back. This Spiderman Plush Backpack Buddy is almost too awesome. This mini web-slinger will carry your stuff and protect your back from Marvel bad guys. It measures about 31″ high and 11″ across. It’s soft, plush, slightly deformed […]

The ol’ spider sense is tingling but Spidey doesn’t seem too concerned about it in the Mary Jane & Spider-Man Art Print. Green Goblin is tossing some pumpkin grenades towards our friendly neighborhood wallcrawler, but the webslinger seems to be distracted by an entirely different […]

The Spider-Man Variant Square Enix Figure can do everything a Spider-Man can… and that’s pretty impressive. Okay, this Spidey can’t swing through a neighborhood, flirt with Gwen Stacy, or hurl insults at Jonah Jameson but it is articulated enough to get into many of Spider-Man’s […]