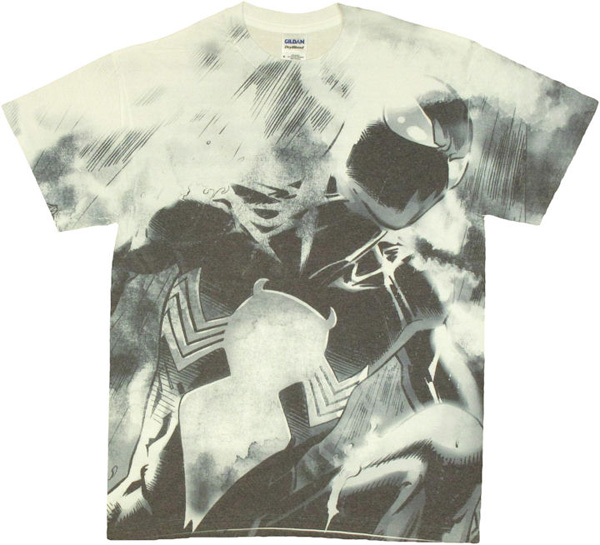 Everyone recognizes Spiderman’s familiar red-and-blue tights, but the wallcrawler was rocking a much darker look for a while and the Spiderman Black Suit Dye Sub T-Shirt lets you wear a stylish and artistic portrait of Peter Parker decked out in his black Spidey suit.

The first time Pete added black to his wardrobe, it turned out he was wearing an alien symbiote that wanted to bond with him, which turned out to not be the smartest clothing choice in the world because that alien would eventually cause him grief as Venom. Still, Spidey must’ve liked the edgy look because he later wore black again; only this time he made sure to use regular fabric.

Moral of the story: Don’t use an alien as clothing because things might not go as smoothly as you hope.

Fortunately, you don’t have to worry about any brain-sucking aliens trying to bond with you because this t-shirt is made of 50% cotton and 50% polyester, and the dye-sublimated print is just as innocent, although it’s hard to believe something that looks this wicked is truly innocent.

The wall-crawler is back to wearing red and blue, but you can fondly recall his darker days with the Spiderman Black Suit Dye Sub T-Shirt for $19.88 – $21.88 at StylinOnline.com.

People will be asking your friends ‘She with you?’ when they see you in this Batman v Superman Wonder Woman Suit FB Sub Juniors T-Shirt. If they’re smart, they’ll say yes. If they say no, drop them because you don’t need that kind of negativity […]

The first Avenger adds a creative twist to his patriotic colors with the Captain America Tie Dye T-Shirt. This 100% cotton tee features an eye-catching red, white, and blue tie-dye design, with a monochrome Captain America charging straight up the center… which is exactly what […]

When it comes to hanging around, nobody does it better than Marvel’s favorite web-head, and the Amazing Spiderman Hang Time T-Shirt features the wall-crawler doing what he does best. The 100% cotton, brown t-shirt has a distressed print of Spiderman from the 2012 film, The […]

Talk about an explosive meal. The Merc with the Mouth might get a little more spice than he can handle on the Deadpool Chimichangerous Tie-Dye T-Shirt. Deadpool serving a chimichanga to Deadpool. It’s one of those things that could only happen to Deadpool, especially with […]