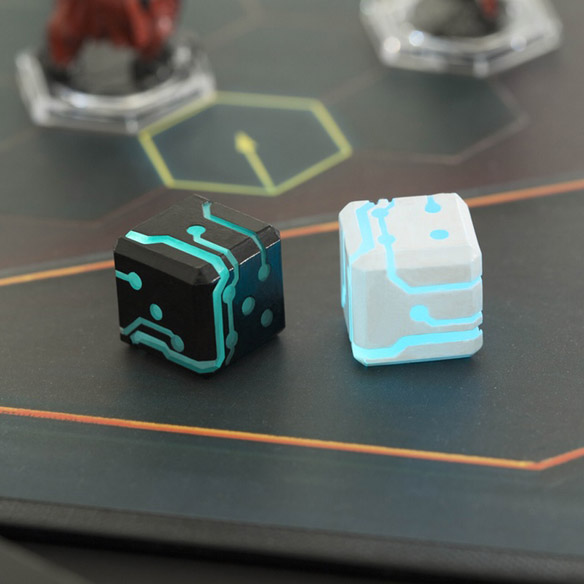 So you’re playing a RPG game filled with starships and lasers and aliens who want to wear your skin as a housecoat, but you’re using dice that came from a Yahtzee game. Not cool, bro.

Now you can roll those numbers with dice that are cooler than the game you’re playing because they glow. That’s right. Now you can play with dice that look like they were filled with energy from your ship’s warp core. Choose from a variety of finish colors (black, white, bronze, metallic grey) and glow colors (blue, green, orange).

This is a Kickstarter project but they’re already up to $55,381 when they were only looking for $15,000… and they still have a few days left. So, yeah, this is basically a done deal.

The best toys in my opinion, aren’t those that are incredibly high-tech or computer based. Rather, I think it’s a lot more fun to go outdoors for a walk or a dip in the pool. Let your child draw up a storm with the My […]

Dog lovers will appreciate the Pet Water Bottle with Roller Ball; large enough to satisfy monster-sized hamsters, but made for man’s best friend. Just like it’s important for you to stay hydrated while exercising in the heat, it’s also important for you to give your […]

How well are you doing with your New Year’s resolutions? If you’ve already fallen off the wagon, hop right back on and reboot. Besides, according to Chinese tradition the New Year has only just begun. Try on these Moxi Red Zebra Roller Skates; so flashy and fly that your next stop might just be […]

A lot of people I know hate math, but I don’t. It’s hard to hate if you studied five years to get an engineering degree which is obviously full of math courses. That doesn’t mean I’m over the moon over math; I just happen to […]

Kick your regular cooking routine to the curb with these neat Foodie Dice. Roll the dice and experiment. Live a little! You’ll get 186,000 adventurous combinations with these dice. It is just the inspiration you need for making creative meals. These dice even come in […]

The Quarriors Mega Dice Battle Game lets you wage war against your opponent using tons of dice and is sure to be hours of fun. You get 130 special dice with each game and a tin to store it all in. Your dice are power […]

Take a break from electronic games and add the Left Center Right Dice Game Tube to your list of games to play during Family Game Night or during casual Fridays with your friends or colleagues. It’s an exciting and action-filled game that’s simple enough. I […]

Want to become a zombie before the undead apocalypse sweeps over the planet? Zombie Dice 2 Double Feature is the must-have expansion pack that will increase your brain-eating fun. It all started with Zombie Dice, the dice game that lets you become a zombie and […]

Are you a foodie who wants to gamble on the next meal? This Foodie Dice Tumbler is all you need. Just roll the dice for your next meal and then get cooking. These dice provide you with over 186,000 possible food combinations. And yes, bacon […]